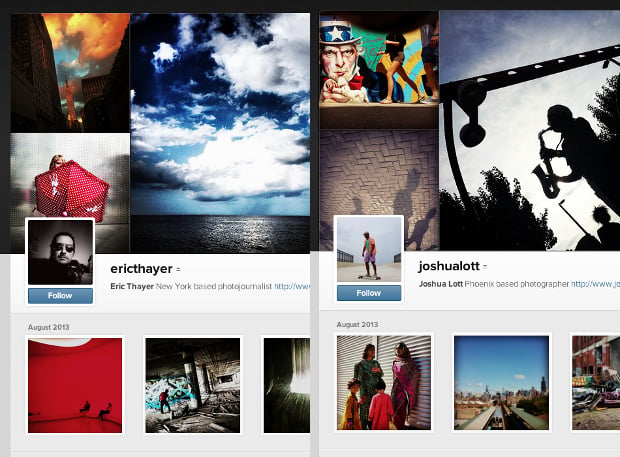 There’s nothing like a friendly competition among peers to make a road trip that much more enjoyable, and when you can get a few thousand people to join in and judge the outcome, that’s even better. That’s what photojournalists and friends Eric Thayer and Joshua Lott did recently when they found themselves in a midst of an impromptu Instagram battle.

Thayer and Lott are freelance photojournalists based out of Brooklyn and Phoenix, respectively. They’ve been friends and competitors since 2007, often working side-by-side covering big news events for clients such as Reuters and the New York Times.

Lott recently took a trip out to NYC to hang out with his friend, and when he arrived, the two photographers began taking pics of the same places and posting the pics to Instagram. All it took to turn it into a face-off was a suggestion from Pierce Wright of Getty Images, and the “battle” had begun.

What began as a friendly shoot-out between friends turned into a two-week competition/road trip that spanned the cities of New York, Detroit and Chicago. With each photo, the almost 50,000 Instagram followers the two have between the two of them weighed in, judging the results and awarding victories to “team Lott” or “team Thayer.”

Here are some of our favorite photos that emerged from the Instagram battle:

The above photos are great examples of how subjective great photography really is: a great photo is shaped by the photographer and not the location or subject. Even though all of the photos were taken at the same time and in (just about) the same location, each offers a unique and sometimes drastically different perspective.

In the end, Thayer and Lott agreed to call the competition a draw, head back home, and prepare for the next time they wind up spending a couple of weeks in the same location. To follow the whole two-week battle (albeit after the fact) you can head over to Thayer and Lott‘s Instagram accounts by clicking on their respective links.

(via The New York Times via Poynter)