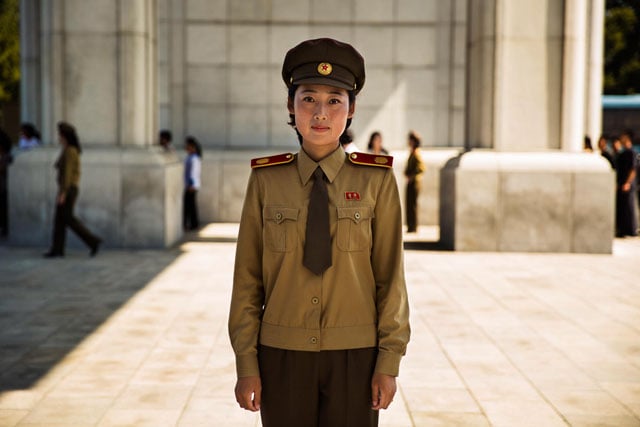 For over two years now, Romanian photographer Mihaela Noroc has been traveling around the world with a camera in hand and shooting portraits of women in their environment for a project titled “The Atlas of Beauty,” which we featured back in February.

The latest country Noroc traveled to in her journey was the hermit kingdom of North Korea.


“When entering North Korea you step in a different world,” Noroc says. “You already know that you will see huge monuments, statues and communist celebrations but you almost know nothing about North Korean women.”

“That’s why I decided to explore and photograph this subject, something mostly unknown for the rest of the world.”

“Women of North Korea are not familiar with global trends but this doesn’t mean that they are not preoccupied by their look,” writes Noroc. “They are, definitely!”

“They have a passion for high heels and usually wear classic outfits, always accompanied by a pin, on the chest, representing one of the country’s leaders.”

“I tried to explore different environments, from factories or universities to public areas like big boulevards, parks or subway stations to show that beauty is indeed everywhere,” Noroc tells PetaPixel.

“Even though traveling to North Korea is limited to certain areas and conditions, the pleasant surprise was that most of the women were open and they kindly accepted to be photographed.”

Image credits: Photographs by Mihaela Noroc and used with permission