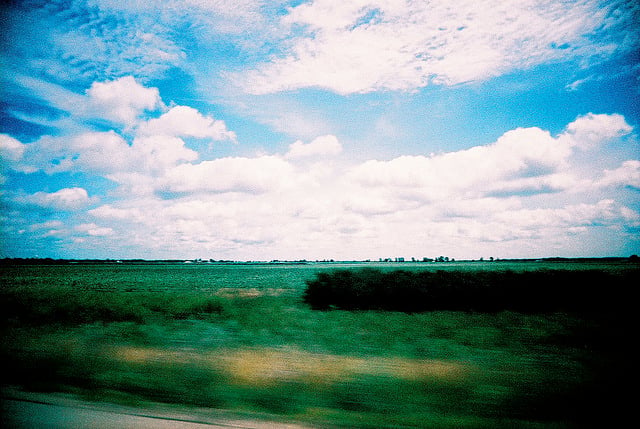 Some photographers live by a set of rules: they follow the standard conventions of exposure and image development to produce realistic photographs that correctly reproduce the world around them. Others, however, see the world through an entirely different lens. They are the rebels; they are the alternative photographers. Today, we throw aside convention to look at five alternative processes and how they can be used to foster entirely new perspectives.

The first alternative process on today’s list is known by multiple names such as skip bleaching or silver retention, but most commonly as bleach bypassing. This process, as the name suggests, involves skipping the bleaching function during the chemical processing of film. As a result, the silver within the emulsion is retained.

Using the bleach bypassing technique results in an image that contains both the silver and color dyes left over from the chemical process. This creates the effect of a black and white image being placed over a color image. The technique also produces a picture with reduced saturation and increased contrast, though sometimes with a grainy texture.

The process of bleach bypassing can sometimes be found in Hollywood movies. One example is Steven Spielberg’s Saving Private Ryan. Cinematographer Janusz Kamiński achieved the film’s look by putting the negative through bleach bypass.

The effect can create a level of grittiness perfect for dramatic environments. To this day, some photographs seek to recreate the effect in Photoshop by using filters or by manually tweaking their image.

The practice of infrared photography can create exotic worlds out of the everyday mundane. Unfortunately, the process has become more complicated with the advent of digital cameras. First unveiled in 1910 when Robert W. Wood published photographs in both The Century Magazine and The Royal Photographic Society Journal, Infrared photography allowed photographers to capture a world previously unseen.

Infrared light is a wavelength slightly beyond what we are naturally able to perceive. By using special film that can capture the unique wavelengths along with filters that block out visible light, we can produce what some may refer to as near psychedelic imagery. Photographers may even use different filters on top of the process to further their creativity.

In the digital age, infrared light can mess with the autofocus systems of modern day camera systems. As a result, manufacturers place infrared blocking filters within their cameras. The most efficient way around this problem is to remove the infrared blocker and, instead, replace it with a visible light blocker. However, doing so may risk damage to your equipment.

In 1832, Englishmen Robert Hunt and John Herschel conducted experiments that utilized platinum to create photographic prints. The experiments resulted in monochrome images with exceptional tonal range. Unfortunately, the photos produced by the duo all eventually faded after a few months of time. By 1880, chemist William Willis began producing a stable solution for platinum paper that boomed throughout Europe and the United States producing what is a modern equivalent of over 6 million dollars.

During the printing process, platinum is absorbed into the paper and, due to the nature of the metal, can produce prints that surpass the quality of and longevity of standard silver prints. Characteristics of platinum prints include large tonal ranges, a more diffuse reflective quality, and a tendency not to curl over time as prints do with gelatin.

Platinum printing eventually died out in the early twentieth century when platinum became over 50 times more expensive than silver. At the time, Russia controlled nearly the entire world’s supply of platinum and had put it towards the war effort. However, to this day platinum printing remains an alternative process for those seeking the distinct styling.

For some photographers, the world of Instagram and easily accessible filters have killed the technique of cross processing. A simple solution that involves processing film in chemicals for a different film, the result produces images with unnatural saturation and abnormally high levels of contrast. There are numerous factors that affect a cross processed image including the film used and the selected chemical solution

Typically, color positive film may be processed in C-41 chemicals that result in a negative image being developed on top of a monochrome base image. Color film can also be cross-processed in E-6 chemicals which results in a positive image with an underlying orange base. Cross processing is generally about experimentation and can lead to some surprising results.

Cross processing is one of the easiest alternative effects that can be recreated using a computer program such as Adobe Photoshop. By adjusting the individual channel curves of colors, custom cross processed style images can be created on the fly to create highly stylized results.

Ever wonder what would happen if you loaded your film into the camera backward? Redscale shooters already know the answer and will be happy to tell you about the results. Inserting film into a camera backward causes the red base level of the film to be exposed first. The result is a color overcast on photographs that range from yellow to red.

When film is typically exposed, the blue-sensitive layer is on top with a filter directly behind it; this filter is in place because blue wavelengths also affect red and green dyes. Because we are shooting from the back, blue wavelengths are exposed within the red and green colors, but no blue dye is affected as it is blocked by the filter.

As one would imagine, the redscale process was most likely discovered by accident by a photographer loading his film backward into his camera. Accident or not, some photographers take advantage of the unique effect to create images that seem to be shot straight from the red planet.

The White House is Shooting with a Sony a7R II Now