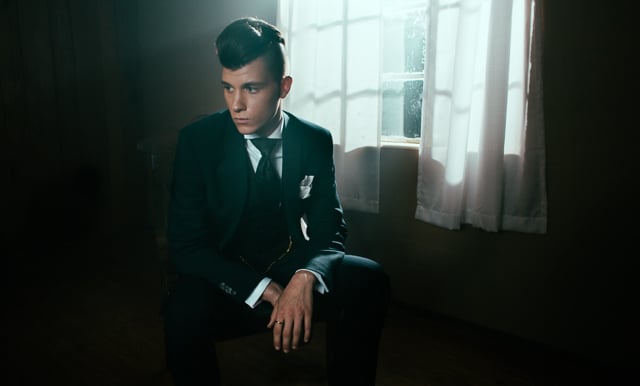 A client named Nick recently approached me as he was finishing his degree, wanting his portrait taken to commemorate the event. With his references, wardrobe, and location, I saw an opportunity to replicate some of the lighting I had seen in Spielberg’s Lincoln. As a period film set in the mid 1800s, light “sources” were limited to daylight, moonlight, or oil lamps and candles. My hope was to capture the magic of cinematographer Janusz Kaminski’s lighting, while also adapting it for the purpose of a more traditional portrait.

Once on location, I start by creating a reference, adjusting my settings and capturing an image in camera that looks accurate to what is seen with the eye. Our starting point is a mid-summer evening in Orlando, which means the sunset is a vibrant orange, and there’s plenty of reflected green light from the surrounding foliage. This quality of light isn’t necessarily bad, it’s just not what we wanted.

So we placed an AlienBees B800 strobe through the window with curtains as the only diffusion and voilla, a light we can finally work with. Notice how easily a setting sun is eclipsed with today’s strobes, though a high noon sun would have taken quite a bit more power.

So we have our light but we’re not finished, we need to give that backlight all the glory it deserves. More often than not, hazers are used in films to provide some atmosphere or texture for the light to ‘grab.’ At times it’s justified in the scene with a character smoking, a hot shower, a fireplace, etc. Yet even when it’s not justified, we(the audience) are still ok with it. Actual hazers are pretty expensive, so I find myself using a cheap Amazon fogger and fan to break it up. The key word here is subtlety, give the fog time to settle and then break it up with a fan.

For the final image, we let the fog settle, brought Nick a chair, put on a 28mm lens and used a silver bounce for his key light, with strobe pointed through the window as a backlight. The tungsten clamp light just outside of frame is more or less to throw some warmth on the wood paneled wall.

Here’s the final portrait we ended up with:

Taking inspiration from period films gives you a great opportunity to create a cinematic look with minimal equipment. Sometimes you want to create something stylized like this daylight/moonlight, or maybe you want it to be a different time of year? Either way, it helps to have your own personal database by taking notes and screen captures of movies you love and then seeing if it can be replicated.

With a bit of study and the right equipment, it’s easy to change up your portraits with light from the movies. So get out there and shoot the light you want rather than just the light you’re given.