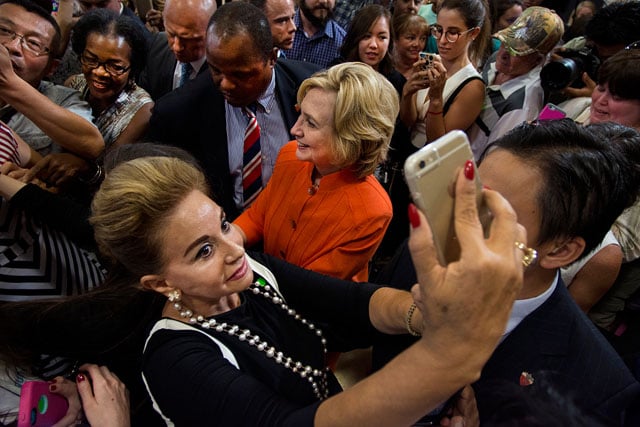 I’m a freelance creative director and professional photojournalist. When I’m shooting, I work quite a bit for the boutique picture agency, Polaris Images in NYC, although I do take a lot of other assignments. I shoot all kinds of assignments—news, features, portraits, and politics… lately, a lot of politics.

I’m in Las Vegas, and with Nevada and its large Hispanic population being one of the early primary voting states next year, all the candidates from both parties are coming through here every week. I’m assigned to cover almost all of them, and I try hard to make more than the usual campaign pictures, if I can.

My first rule when I come into an event: I want to be where the other photographers are not. This year, I’ve noticed a trend—I’m not sure yet if the trend is good or bad—but it’s definitely changing the way presidential campaign events are staged and photographed. 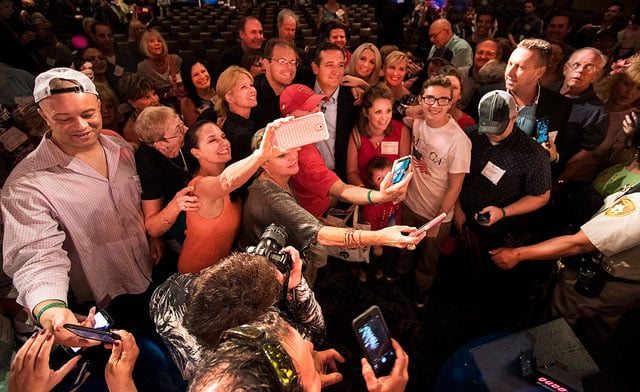 After the speeches and the Q&A, when the candidate plunges into the crowd to meet supporters (we photographers affectionately call this “the scrum”), it’s the rare supporter nowadays who wants to shake hands or get an autograph. What they really came to do, and want to come away with, is a selfie with the candidate.

A picture posing beside the candidate taken by a friend or spouse, is a close second. And getting a picture of the candidate holding your baby now seems to be the holy grail of campaign event attendance. Not only do they want this, they basically demand it, and feel it’s their inalienable right to have it, so they can post it to social media for all their friends to see.

For the campaigns, it seems to be both a blessing and a curse. Lots of pictures of the candidate showing how friendly they are get circulated on social media. But on the other hand, these scrums with the public have taken on a whole new level of mayhem. The hoi pollloi are no longer politely accepting a handshake, a kind word, or thrusting a baby forward for them to kiss. No, they’re right in there mixing it up with the candidate, their aides, beefy security people, and the press, angling to get right next to the candidate to get a picture. 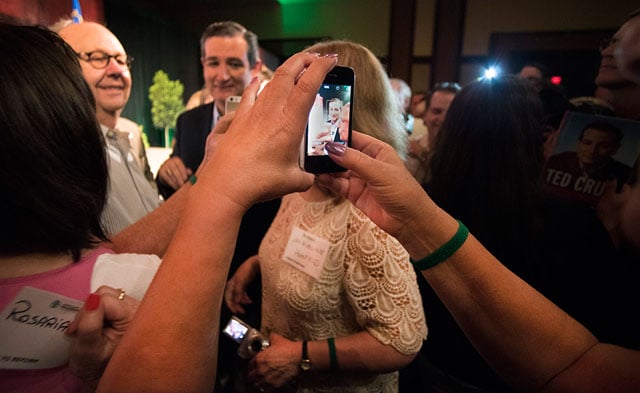 I’ve had press aides from many of the candidates tell me that they have to allow more than three times the amount of time for this craziness than in the past, and that the time allowed in the daily schedule for getting the candidate from one event to the next has exploded because of this. While handshakes along a rope line are easy to control and can be handled in a fairly quick time frame, digging the candidate out of a scrum that’s 15 people deep on all sides — while everyone angles to take a selfie or their friend’s picture with the candidate — can take a monumental amount of time.

For the press, those of us covering these very early primary events — after all, it is still five months before the Iowa caucuses — we’re used to having good access to candidates in these early days of the campaign with small, “retail politics”-type events, and fairly easy-going security. But with the selfie takers pressing for their pictures too, we’ve become part of the free-for-all—ironically making it much harder for us to get good pictures.

You know, the ones without 40 cell phones in front of your lens.

About the author: Brad Zucroff is a freelance creative director and professional photojournalist. You can find his photos and the sources he offers on his website, Omnivorous Media.

Comparing a VSCO Film Emulation to the Actual Film