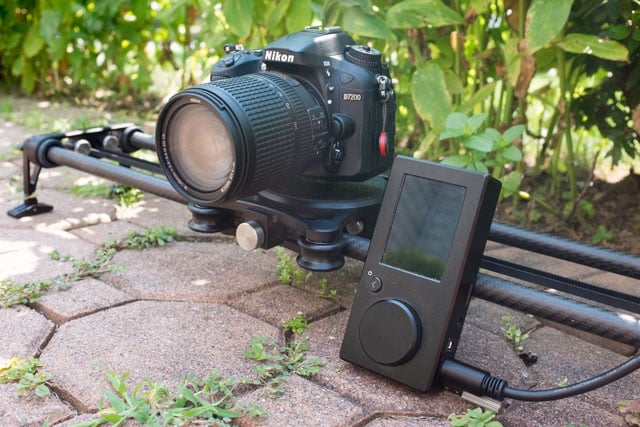 Rhino Camera Gear is a manufacturer of professional sliders and stabilization rigs for videographers and photographers alike. This month, we got a chance to test out two of their latest products, the Rhino Slider EVO Carbon and Rhino Motion module. Combined, both pieces of equipment promise to create butter-smooth videos and time-lapse effects.

The EVO Carbon is Rhino’s light weight solution for having an easy-to-carry slider available on your person. The model is available in both 24” and 42” rail sizes; we received the 24” unit for testing. Able to support a load of up to 15 lbs, the carbon fiber rails can be interchanged at any time for stainless steel. While stainless steel can support up to 100 lbs in our current configuration, it is almost twice as heavy when compared to the carbon fiber rails. 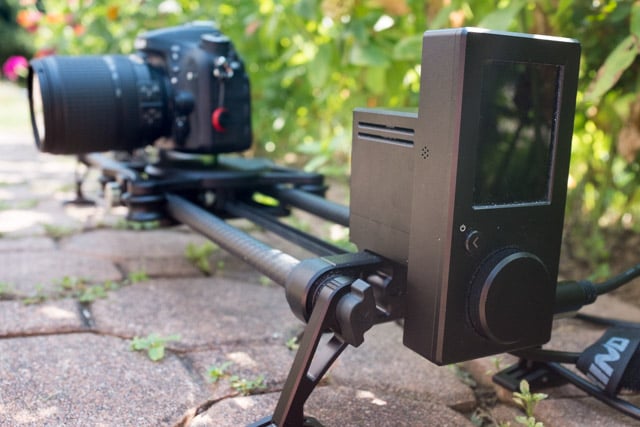 Rhino’s Slider EVO appears quite simple at first glance. Just like any other slider, the unit consists of two rails, a carriage, a mounting plate, and adjustable feet. Of course, looks can’t tell you everything about the unit. The carriage itself runs incredibly smooth across the provided carbon fiber rails and can be locked at any time with a carriage brake. Easy to engage, the brake was able to prevent our Nikon D7200 from sliding back and forth during transport.

The legs themselves are also quite well designed and allow for fast adjustments; all which you know will remain stable. Each leg is spring loaded and features indexing marks to lock them from moving about. The result is quadruple legs that we could quickly setup on any terrain even including tree logs and unstable rock surfaces. In terms of mounting your camera, you can use any flat based ball or fluid head with a 3/8” screw mount. You can also directly mount a camera to the slider, but will most likely need an adapter to convert the 3/8” screw mount to a standard 1/4” mounting point.

We were happy to see a number of available tripod mounting options including supporting the slider from either the center or ends. Also, each method supports both 3/8” and 1/4” screws so you won’t have to worry about the gear you are lugging around. We used two Ravelli ALS Air Cushioned Light Stands to get the job done. Manually moving the carriage was a breeze, and we always felt like we were in control of the unit while obtaining smooth footage. The rail operated like it was not even there with the camera merely gliding through the air. For those looking for a slider, the EVO Carbon seems like a dream come true. For even smoother movement, Rhino offers an optional flywheel; however, we did not receive a flywheel in our test kit.

What we did receive was the company’s Rhino Motion module that allowed us to easily motorize the slide within minutes. We have to say outright that the Rhino Motion module is the most elegant and beautiful solution we have ever seen. Just clip on the motor to the end of your slider, attach the external controller, and you are ready to film. The motor itself is almost dead quiet; it is only audible at fast speeds, but when compared to most other systems you wouldn’t even know the mechanical gears were working. Rhino calls the technology “Stealth Drive” and we have to agree with the catchy marketing. Pair the ultra-quiet motor with an ‘ultra-precise (.7µ resolution) drive system and you are creating video magic. While we were not able to run down the battery to complete testing, Rhino claims it can last up to seven hours.

The controller is a quality product and feels as such. A large and colorful screen greets your eyes and is controlled by two simple buttons below. The smaller button functions as a back button while the larger button is a combination wheel that can be clicked in to select on-screen items. The unit powers on quickly and allows you to easily live into the settings, live motion adjustments, or calculated time lapses. If you head to the ‘Live Motion’ section, you can either opt to either program a move or just turn the wheel to slide the carriage. In our testing, we mainly used the ‘Turn to Slide’ option as it worked wonderfully. The carriage was also calibrated to know the edges of the unit so it would never slam to a stop on either end. The ‘Create a Move’ or programming mode allows us to choose how far we want the slider to move-in, how far we wish it to move-out, whether we want the speed to ramp, and if we want the program to loop continuously.

Heading into the ‘Time Lapse’ section allows you to set up the motor controller to move the unit at specified intervals and trigger the camera’s shutter. A cable of your choice is included with Rhino motion so you may connect the unit to your camera system. At this time, supported camera brands include Nikon, Canon, Sony, and Panasonic. The only thing that we, unfortunately, have to point out is that the cable that connects the motor and the controller broke while we were using it. For those of you who lived through the 1990s, the cable connector is reminiscent of the older PS/2 style connectors with long fragile pins that tend to get bent. However, upon contacting Rhino they immediately sent out a new cable that had been redesigned to remain anchored into the controller – we have not had any problems since.

Overall, the Slider EVO Carbon is a beautiful piece of equipment that we believe any videographer would instantly fall in love while using. The carriage rides cross the rails as if they weren’t even there, and the unit itself is well built and adaptable to various situations. The Rhino Motion module is simply excellent and easy to use and can support up to 25 lbs of weight when placed horizontally.

Here’s some sample footage captured with a Nikon D7200:

The ‘Campaign of the Selfie’ for the 2016 Elections