A 16-year-old boy has caused a stir after releasing a video showing himself being denied the right to film a checkpoint pat-down — something the TSA officially allows.

YouTube user Apple Lucas claims that he was denied the right to film while being patted down by a TSA supervisor at Louis Armstrong New Orleans International Airport in Jefferson Parish, Louisiana. He then tried to film his father getting patted down, only to have the TSA agent call a police officer to the scene.

“I explained to him that it clearly states on the TSA website that you are allowed to film the TSA agents as long as you don’t film their monitors and are not interfering with their process,” Apple Lucas writes.

And he’s right: the TSA website has a page dedicated to telling the public that photography and filming is perfectly okay at airport security checkpoints. 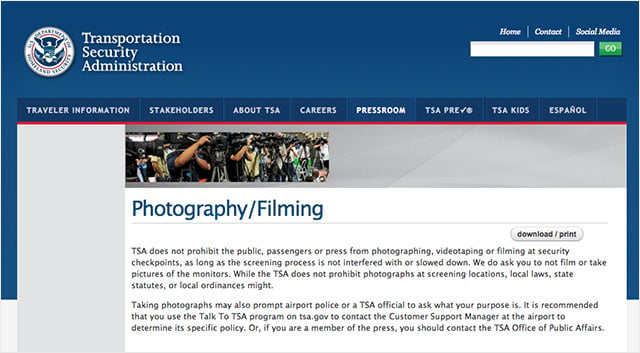 TSA does not prohibit the public, passengers or press from photographing, videotaping or filming at security checkpoints, as long as the screening process is not interfered with or slowed down. We do ask you to not film or take pictures of the monitors. While the TSA does not prohibit photographs at screening locations, local laws, state statutes, or local ordinances might.

The TSA also provides a downloadable and printable version of the text, in case you’d like to carry a copy of the text with you while traveling.

“Officer, I need this young man gone,” the TSA agent says in the video. “I don’t care what he’s seen on the Internet, I need him gone.”

“On the TSA website it says I can film the procedure,” the boy responds.

“I didn’t put that website up,” the agent says. He later adds: “You don’t like this, you respect this badge right here.”

The video has since received tens of thousands of views since being posted on YouTube yesterday, and the story made it to the front page of Reddit as well. We’ve reached out to the TSA for comment, and we’ll update this post if/when we hear back.

Update: “We are aware of the situation and are conducting an internal review,” the TSA tells PetaPixel via email.

AP to Upload More Than 550,000 Historical Videos to YouTube

This is the Power of Age-Reduction Visual Effects