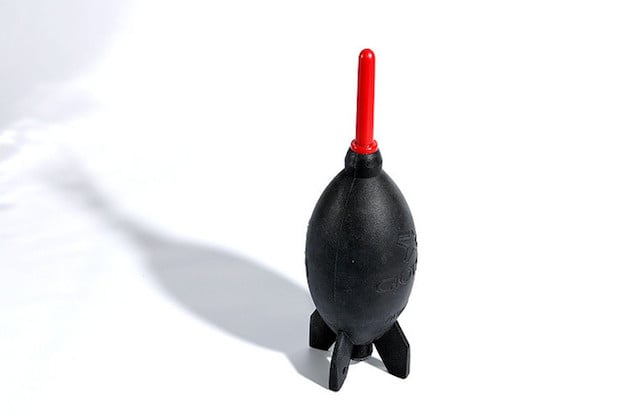 It’s common knowledge that the Giottos Rocket Blowers and the TSA don’t get along. In the past we’ve told you to just leave it at home unless you want it confiscated with no more reason than “it looks like a bomb.” But the reason photographer and Canon Rumors forum user Surapon got was a whole lot more entertaining than that.

Surapon shared his experience on the CR forums, where he told the comical story of how 10 years of altercation-free TSA experiences with his blower in tow ended abruptly in 2012.

On his way back from a trip to Greece — one of the most beautiful and dusty locations, according to Surapon — he was transferring terminals in New York when security asked him to open his bags. They, of course, asked about the blower, an inquiry Surapon answered courteously enough, even spraying some air in his own face to demonstrate how it worked.

That’s when the TSA officer dropped this line: pointing to the fins he asked, “can it fly like a rocket?”

Surapon was, understandably, dumbstruck. When he didn’t answer, the officer walked over to his supervisor, had a brief conversation, and then told Surapon that his blower needed to be thrown away because, “if someone put gun powder inside this Rocket Blower, it can fly like a missile.”

Of course, when airport security tells you to do something, you do it — so the $10 doohickey went into the trash and that was that.

From then on, Surapon made a simple alteration that has kept him from getting in trouble with airport security since: he cut off the fins. Since then, no TSA agents have suggested that he could fashion a rocket out of his Giottos blower. That’s not to say they won’t… it just hasn’t happened again yet.

Crunching the Numbers: Four Insights We Can Glean from Camera Sales Data