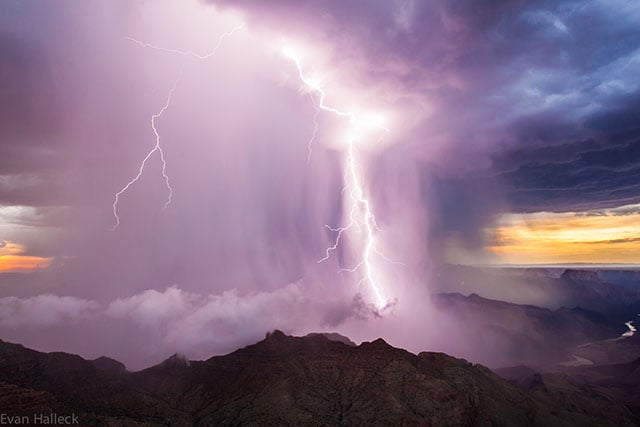 Photographer Evan Halleck was visiting the Grand Canyon recently when he saw a storm brewing in the distance. He drove up to it, set up his camera for a time-lapse sequence, and ended up capturing some incredible images of a thunderstorm pouring rain and lightning into the canyon.

The 24-year-old Los Angeles-based photographer has been working on nature photography and time-lapse projects for about 5 years now. A filmmaker by day, Halleck was on a 2,100-mile road trip to work on a movie in Texas when he decided to make some stops at well-known natural landmarks.

“When I was at the Grand Canyon I saw that storm forming way in the distance so I got in my car and drove 25 minutes towards it,” he tells PetaPixel. “I was scared for my life but my whole life I have always wanted an epic storm photo like you see on the Internet.”

He ended up taking a photo every 5 seconds for two hours, and a photo every second for the last 20 minutes. He left the canyon with 1,200 RAW photos, including the epic shot seen above (Halleck says he “screamed with joy” when he first saw it).

Halleck then took the entire sequence of shots and created this 54-second time-lapse of the storm pummeling the canyon:

Image credits: Photograph and video by Evan Halleck and used with permission

Palette Launches to Shake Up Your Photo Editing with Modular Controls