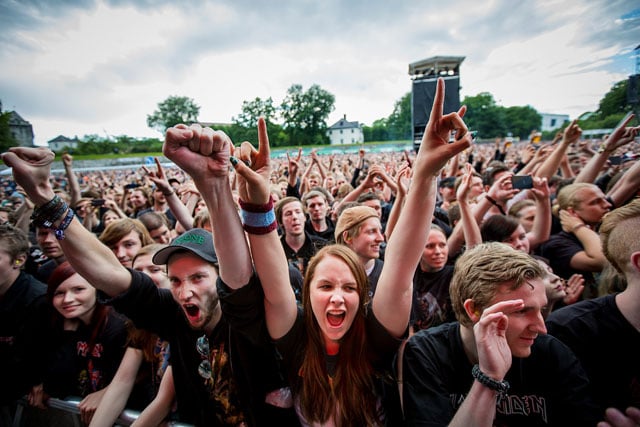 Over the last couple of weeks, the matter of photo contracts has once again been debated. First came Jason Sheldon’s blog post, calling Taylor Swift out on her hypocrisy when attacking Apple for demanding musicians give away their music for free while doing the exact same thing to concert photographers in her photo contracts. If you’re reading this, you’re probably well aware of that whole ordeal, so there’s no need to get into it further other than to say that I fully support Sheldon’s views.

His post made some waves, the latest being The Washington City Paper refusing to sign the Foo Fighters’ infamous contract. Honorable as it may be, as pointed out by Kevin Bergin, their way of solving the problem will make matters even worse for concert photographers.

Michael Zhang here at PetaPixel called the decision a “brewing revolution” in the world of concert photography, but I’m not so sure. Right now, it’s “viral”, so there is an immediate payoff, but, as soon as the story fades, so does the will to make change among the decision makers.

After all, this is not the first time we’ve seen an “Internet riot” against photo contracts, and yet, they are still everywhere. Well… except in Norway, but I’ll get back to that.

I see myself as a photojournalist and fully adhere to the responsibilities tied to that label. When I post photos, they are the truth, or at least as close as I can get to it, strictly following the guidelines of the Ethical Code of Practice for the Norwegian Press in all my editorial work. Nothing is added or removed, nothing is changed for better or worse. My photos are first and foremost journalistic work, and my audiences can trust that I do not deceive them in my photos.

But, I also see myself as an artist and care just as deeply about my art as any musician about their music. The greatest challenge to concert photography, in my opinion, it to make art of reality. Not just documenting reality, but showing the world the hidden aesthetics in it. In many ways, it’s a lot like street photography. If it’s staged or “photoshopped”, it loses its value. It’s no longer art in reality.

Of course, making art for art’s sake (l’art pour l’art) with the tools available to you, isn’t a bad thing, and I know a lot of concert photographers doing just that, but I’m a journalist. To me, the real world is enough. And, if you are working for an outlet of any kind, you should feel the same way. People reading a newspaper, magazine, or even a music blog are trusting that you show them what the concert was really like, not how good you are at Photoshop. Your readers are expecting the truth.

The discussion regarding photo contracts seem to be centered around the idea of the concert photographer as an artist. A photographer, an artist in his own right, should be able to control (and get paid for) his own work. Handing out a contract demanding the photographer to sign away or limit those right, is disrespecting a fellow artist.

While I, as an artist, fully support that notion, I believe that journalistic integrity should come first. The problem with the above is that not all concert photographers care enough about their work (or monetizing upon it) to defend their rights as long as they get to shoot their favorite band.

There’s also the problem of some people viewing an artist as somewhat larger than life, where you, as a concert photographer, are lucky to be even in their presence and should adhere to their contracts (rights grab or not) out of sheer honor.

An artist can be manipulated and bullied into giving up his rights. However, if you have any journalistic integrity at all, it doesn’t matter who you are shooting or what artistic aspirations you may or may not have.

One of the most important tenets of journalism, is the idea of a free press. That means, as a photojournalist, you can not allow any company, person or artist to decide what you can, or can not capture or publish. Then the press is no longer free, but dictated by external forces. In a free democracy, the public needs to be able to trust that the press acts as a free agent, without any constraints or limitations exerted by external forces.

It’s All About Control

Artists (and their managements) will always try to control what the press publishes about them, and while I completely understand the want to control an artist’s image, it is not for the artist or anyone else to decide as long as we live in (and want to continue living in) an open, free democracy (hell, in the age of smartphones and great pocket cameras the whole idea of trying to control image to that extent is, honestly, just silly, as photos will be captured anyway – but they will always try).

We, as photojournalists, should treat musicians just the same as we would a politician. If a politician openly tried to control the media in the way some musicians are, it would be a scandal, and yet there isn’t any real outrage. Sure, the artistic photographers are angry, but that’s about it.

Concert photographers seem to worry most about the rights grab aspect of some contracts (and, to some extent, the limitations on reselling photos to other outlets), and sure, I totally get that. The Taylor Swift photo contract that [re]ignited the discussion this time around, was mainly criticized for being a rights grab contract. And yes, I like so many others, feel that a rights grab contract is disrespecting me as an artist.

And it’s spreading, because of course it is. They always want more control, and will take it if they can. Now, we’re seeing more and more artists putting limitations on how we photograph them, as well. Only shoot the left side of the face, or from the waist up. The newest instance I’ve read about, is artist Lily Wood demanding no photos to be shot in profile or overview (unfortunately I have no link to back this up, as it was discussed on the closed Concert photographers group). The worst contract I’ve come across was when Crystal Castles played in Bergen a couple of years ago, with a contract demanding photos to be pre-approved by their management before publishing. You give them the finger, and they will take the hand. Now that right there is a scandal. Yet, nothing went ‘viral’ back then.

With this in mind, it baffles me to see not only concert photographers but also major newspapers and outlets signing photo contracts. Where is their journalistic integrity? If a politician demanded to be only photographed in a certain way or that photos be removed after a given period of time, it would be unacceptable, so why is it any different for artists?

But Who Gets Control?

Of course, photos also have a historic value, and should be allowed to live on for future generations to see. They are what live on when the present has passed. They are history. Having anyone try to control what lives on or not in the way many, if not most, contracts try to gives artists and their managements power over history that they should not have.

One of the most important and recognized concert photos of all time in one in which Johnny Cash is flipping off the camera at his San Quentin concert, imagine if a contract had been signed, and his management for some reason or another, didn’t like what they saw (or didn’t see it at all, but the photo could only be printed once). Imagine what we, and history, would have lost!

It is not for you, me, or any one else to decide what will be important to history. Securing free speech (including as photographic documents) is also securing our history and legacy. Censorship should not be accepted regardless of who tries to impose it. You, as a photojournalist, should have enough integrity to not let yourself be slave to the despotic whims of an artist or their management. They may deny us getting in — that’s their right. But when they let us in, they may not dictate how we chose to shoot or how we chose to publish.

So stop thinking about yourself primarily as an artist. You are a [photo]journalist. You may create art, but it’s more to it than that. You are a part of the free press. Encourage new photographers to identify as journalists. Make the journalism be as natural to our profession as the artistry, and heed to the obligations that come with that label.

Get Yourself Some Integrity. It’s Cheap!

We generally do not meet any photo contracts, and the few we do never get signed. And because of that, contracts are rarer and rarer. With the press associations and unions behind us, we actually have a powerful voice against such demands, and the contracts get dropped (though, it has to be said that the local promoters have done tremendous work as well in that regard, but without all of the press acting like a collective, they would have no incentive to waiver the contracts).

The aforementioned Foo Fighters contract? Guess what: that was not presented to the photographers in Norway. I can’t even remember the last time I “had” to sign a contract. That’s what having some integrity gets you.

About the author: Jarle H. Moe is a photographer based in Norway. You can find more of his work and writing on his website and blog. You can also connect with him through Flickr, Twitter, and Instagram. This article was also published here.

An Online Archive of Leica Photography Magazines Dating Back to 1949