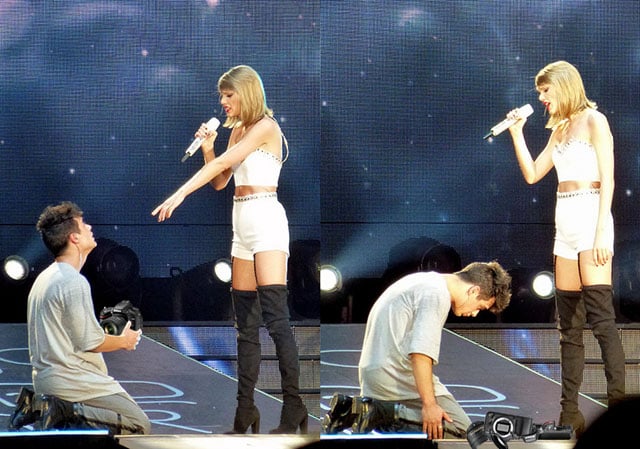 Yesterday, photographer Jason Sheldon published an open letter to Taylor Swift, accusing the singer of being a hypocrite by accusing Apple of treating artists unfairly while herself handing out heavy-handed contracts for concert photographers to sign.

It turns out Sheldon’s contract was a bit outdated: the latest version goes a step further by stating that photographers who violate the contract can have their gear destroyed on the spot.

On Sunday, UK-based freelance photographer Joel Goodman tweeted a copy of the new contract, which is being handed out to photographers for Swift’s latest 1989 World Tour. Here it is with some sections highlighted by Goodman (click to enlarge): 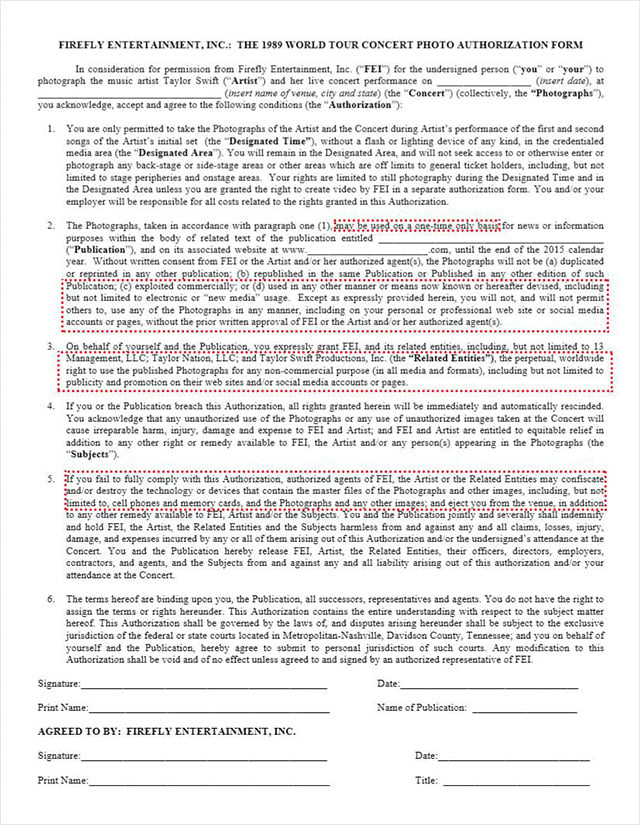 “It has been passed to me by two other photographers whom I know, independently of one another, on condition that they remain anonymous,” Goodman tells PetaPixel. “Some photographers fear losing income if they get blacklisted for speaking out against these kind of contracts.”

One section that is particularly concerning to photographers is section 5, which reads:

If you fail to fully comply with this Authorization, authorized agents of FEI, the Artist or the Related Entities may confiscate and/or destroy the technology or devices that contain the master files of the Photographs and other images, including, but not limited to, cell phones and memory cards, and the Photographs and any other images.

Basically, Swift’s management company, Firefly Entertainment, Inc., reserves the right to destroy a photographer’s equipment if they break the terms of the contract.

“This contract is particularly egregious in that it not only contains an all out rights grab on the photographers’ work, whilst limiting their editorial control and ability to earn from that work — and does so without compensation — but because it does so under threat of criminal damage or destruction of property,” Goodman says.

We’ve reached out to Swift’s representatives regarding this contract but have yet to hear back.

Image credits: Header illustration based on photos by GabboT