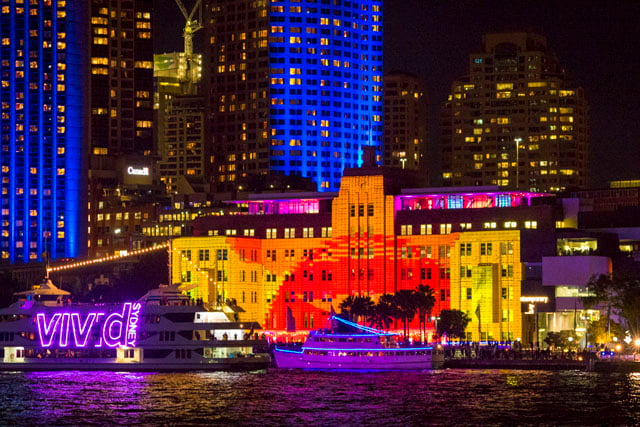 Vivid is a festival of light and color thrown by the city of Sydney every year. Run by Destination NSW (the state’s tourism authority) and paid for by a mixture of state and business sponsorship, it’s an amazing looking event. At its core are the building takeovers in which they drop unique projection-mapped animations on some of the most famous structures in the world, located on one of the most famous harbours in the world.


Combine all that with special events, concerts, talks and micro-installations dotted all around the harbour, food trucks and all the usual awesome attractions of Sydney harbour and you’ve got a winning combination. It’s an awesome spectacle that you should definitely check out.

Sounds like the perfect event to attend as a photographer, doesn’t it? However I have something semi-controversial to say about it and I hope you’ll bear with me while I explain. I think you should consider leaving your camera at home when attending an event like Vivid Sydney. Let me explain this heresy.

It’s been photographed to death

We photographers are always told to try and find a unique viewpoint, an interesting combination, a mixture of technical know-how and hardware that combine to make a unique photograph. However when it comes to an event like Vivid, there is no combination that has not been tried by someone else. Whatever viewpoint you imagine, whichever lens you envisage deploying, no matter how long the exposure you were going to use – several hundred people have done it before you. If you’re happy taking exactly the same photo as thousands of other people, then rock on. 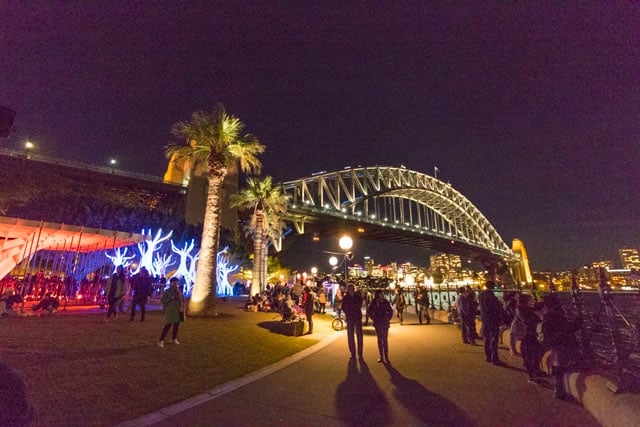 I’m a member of many photo-related groups on Facebook and every year I dread the return of Vivid Sydney and the endless cloned photographs of the same buildings. Have my fellow photographers got no imagination? Can’t they find some new angle? No, they’re perfectly good photographers with perfectly good imaginations, they just have a finite number of options at their disposal. Everyone photographs the Opera House from side-on (from the Cruiseship Terminal), from above the Opera Bar and from the bridge with a zoom because that’s the side that’s lit-up. Why? Because those are the angles that work. The only alternative is to be artfully horrible.

This year I attended Vivid Sydney partly out of a sense of obligation and partly because I wondered if my fellow photographers were as deeply unimaginative as it appeared. I am happy to report that they are not, they have worked with the material at hand to the best of their abilities. They’ve gone close, they’ve zoomed from kilometres away, they’ve got low, they’ve gone high, they’ve gone freeze-frame, they’ve gone long-exposure, they’ve gone panoramic, they’ve gone timelapse – I haven’t seen the drone footage yet but I can guarantee that it’s out there. I’ve seen photographs from amateurs and hardened professionals alike and they’re all the same.

We ruin it for everyone else

By nature I’m quite a solitary photographer which may have colored my experience a bit, but I defy even the most gregarious of snappers to walk away from Vivid at the end of the night without wishing they never see another photographer again as long as they live. It could almost have been a photographic convention there were so many of us about. From selfie-sticks to medium formats on wooden tripods — I saw it all. Canon, Nikon, Sony and Leica, Apple and Android — just about everyone seemed to be pointing a camera of some sort at the lights. Is it any wonder that one of the biggest sponsors this year was Canon? I felt extremely sorry for the people in wheelchairs, for the elderly and the parents trying to guide young kids around the harbour because you couldn’t go three inches without bumping into another tripod or another head-high zoom lens. Navigating your way around the harbour was a peculiar sort of hell with cameras and tripods glancing off bodies trapped with the flow of humans. And god forbid you actually want to stand somewhere and look at the lights – every spare inch was occupied by earnest looking photographers, their tripods and their bags. It was like occupation-by-hobbyist and to bad for you if you’d actually gone there to enjoy the lights with your own retinas.

While I was at the Museum of Contemporary Art I found a nook at the back of the crowd near the tower that houses the projectors used to display the animations. I was joined by a family – mum, dad and two young kids. No sooner had we taken stock of the amazing visuals on the building then an old lady came and stood in front of us, hoisted a large tablet device up above her head and proceeded to video the scene. In the process she completely obscured the views for the kids behind her who got to watch everything on the back of her crappy tablet.

I often think we photographers ruin things for ourselves. By searching desperately for some unique composition we forget to enjoy the very event we’re attending. It was only when I got myself a burger from a food truck and sat down under the southern pylon on my own with my camera at my side that I really got to take it all in. I’d been so focused on finding some unique vantage point that I’d whizzed past many of the exhibits. Perhaps if I’d taken a moment and stopped worrying about taking ‘the’ photo of Vivid I’d have enjoyed it a bit more.

When we head out with our cameras we put our photographers heads on and everything suddenly becomes about the light, the composition, the exposure, the lens. Even when I don’t head out with my camera I find myself thinking about these things. I used to laugh that I could never look at a sunset again without trying to gauge the correct exposure, but I’m not sure it’s a laughing matter any more. Has the process of capturing a scene turned me into someone who’s incapable of truly enjoying it, in the same way that hi-fi geeks can only hear the line noise and the crackles and not the music?

Tune in and switch off

If I ever return to Vivid Sydney I can categorically state that I will be leaving my camera at home. If I’m desperate for some momento of the evening then henceforth I will use my iPhone camera to snap a couple of selfies. I’m also going to leave my camera at home for the New Years Eve fireworks (how many photos of fireworks does anyone need in their life?), for Australia Day, for the Boxing Day weekend, in fact for all of these shows and events that take place every year can be safely captured for posterity by one person whose images I can enjoy in the local newspaper.

In a very real sense I’m very happy to have had a lousy time at Vivid, it has taught me that some things should be viewed first-hand, not through a view-finder. I think my photography will be all the better for it.

About the author: Andy Hutchinson is a photographer and journalist based in South Coast, New South Wales, Australia. You can find more of his work and words on his website and blog. This article was also published here.