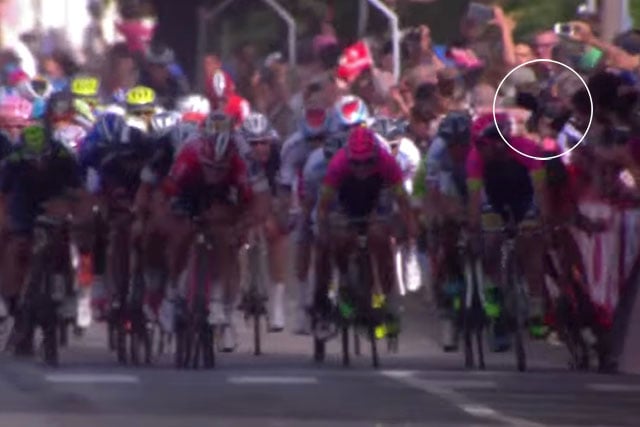 A spectator at Italy’s top bicycle race caused a horrible crash yesterday after letting his DSLR camera and lens hang too far past the fan barrier. Italian biker Daniele Colli slammed into the long telephoto lens, falling off his bike and causing a chain reaction of bikers crashing.

The AFP reports that Colli suffered a broken arm and race leader Alberto Contador was left with a dislocated shoulder in the Giro d’Italia (“Tour of Italy”), one of cycling’s three major “Grand Tours” (the “Tour de France” is another).

Television replays captured how the crash was caused by the camera hanging too far into the road:

Here’s a full clip that aired on TV (Be warned: It contains a very gruesome shot of Colli’s broken arm after the crash):

Colli later tweeted that the person who caused the crash should apologize to everyone for what happened:

In a second tweet, he also said it was unfortunate that he crashed because of someone’s carelessness. This crash is raising new concerns about biker safety at major races, and we’re guessing that some new rules may be enacted as a result of it.

(via Peloton via Business Insider)

Speed Editing a RAW Landscape Photo in 5 Minutes with Photoshop