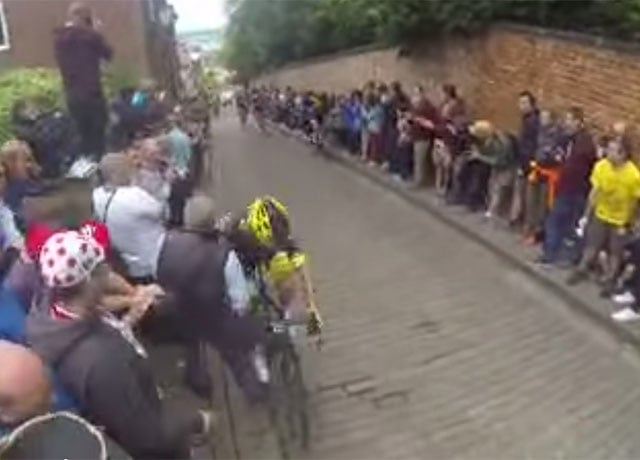 It’s like deja-vu, all over again. A month after a fan photographer caused a horrible crash at Italy’s top bike race, another DSLR shooter has caused a crash at the British National Road Race Championships.

The man was using a DSLR and a telephoto lens on Sunday, photographing the cyclists with one foot in the cobbled Lincoln road. When cyclist Kristian House came near, instead of moving off the road, the man inexplicably stood his ground until House collided with him, sending House and his bike tumbling.

The incident was captured by another spectator in an this 1-minute-long low-res video:

A photographer further down the road captured the moment before the collision:

Stunned by this photo from @VeloUK on Facebook… 'The Dude' Kristian House is knocked off just after this. Not cool. pic.twitter.com/GiHuQ6xwFG

Another photographer in the UK was knocked over last month after standing in the way of the Queen’s Guard, but that guy wasn’t paying attention and looking in the opposite direction — the photographer at Sunday’s race appeared to be pointing his camera straight at the biker he knocked over.

A Primer on Reading and Using Histograms

olloclip Studio: A Case System That Takes Your Phone Camera to the Next Level