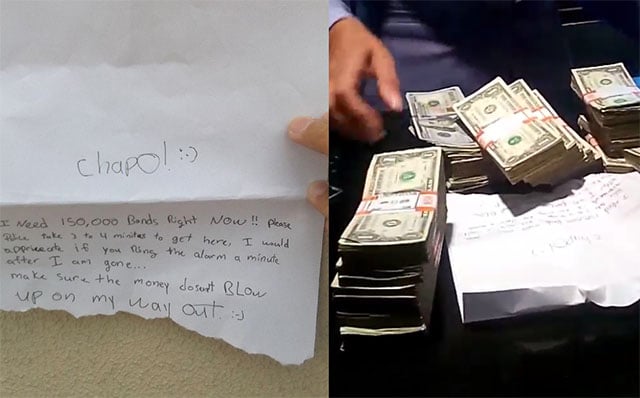 It’s crazy what people do for their 15-minutes (or 15-seconds) of Instagram fame these days. One man in Virginia is accused of robbing a bank this week and sharing a photo and videos of it going down with his Instagram followers.

Dominyk Alfonseca was arrested on Monday after allegedly walking into a bank in Virginia Beach and handing the teller a note that demanded “150,000 bands”. Alfonseca made his escape after the teller handed over the cash, but he was quickly arrested by police officers within half an hour of the incident.

What’s bizarre is that Alfonseca documented the whole thing on Instagram and shared it publicly prior to his arrest. One photo appears to show the note he handed the teller:

Now, behind prison bars, Alfonseca is saying that he didn’t do it for the money. “For real, I didn’t even do it for money, you understand? I didn’t do for that money. I knew my pic would get exposure,” he tells local news station WVEC.

Alfonseca is also arguing that what he didn’t wasn’t a crime, since he simply asked the teller nicely for money and she gave it to him.

“I’m basically asking permission for money. In my eyes, I did not commit a robbery, and I feel I’m being charged without reason,” he says. “I posted the video on my Instagram. I videotaped it. If it was a robbery, I don’t think I would videotape it, post the picture of the letter and do that all to come to jail.”

Update: It looks like the photo and videos have since been taken down.

Walking Through Shanghai in a Backwards World