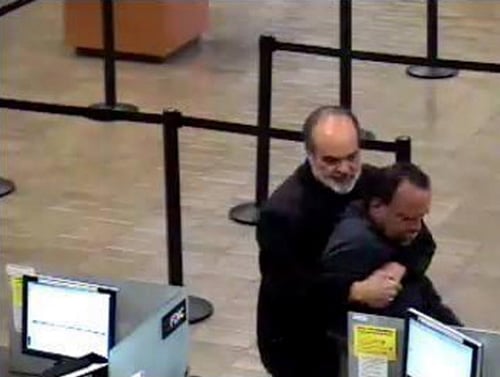 On Monday afternoon, just hours after the 2010 Pulitzer Prize winners were announced, Pulitzer-Prize winning photographer Kim Komenich was standing at a Wells Fargo bank in San Jose, California when he noticed the man in front of him hand the teller a note. As the teller began to empty a cash drawer, Komenich proceeded to wrap his arms around the robber in a stifling bear hug.

Police found Komenich and Fernandes still entwined in their awkward embrace. They quickly arrested Fernandes and his two suspected accomplices, who had remained in the customer waiting area. They were later booked on robbery charges. No gun was ever found.

Komenich, an assistant professor at San Jose State University, is no stranger to dangerous situations. In 1987, while working for the San Francisco Examiner, he was awarded the Pulitzer Prize in Spot News Photography for his coverage of the Philippine Revolution and the fall of Ferdinand Marcos.