Bird photographers are reportedly flocking to the town of Noordeinde in The Netherlands after the discovery of a large and friendly European eagle owl that enjoys landing on people’s heads. The video above shows the 6-pound bird swooping down from a rooftop and landing gracefully on a woman’s head in the midst of delighted photographers. 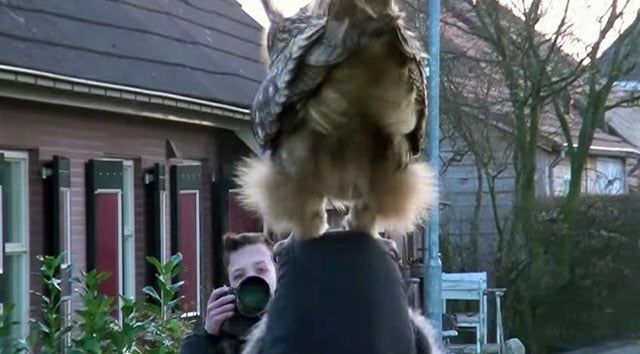 The Daily Mail reports that some photographers are traveling tens of miles in order to see and photograph the quirky bird. It generally spends from a few moments to a minute perched on a person’s head before flying off to find another place to sit.

“I have seen photographers and birders from around the country, from The Hague to Spijkenisse, they come from everywhere to see the eagle owl. Our village is finally on the map!” one resident of the town is quoted as saying.

Others believe the bird may have escaped from an aviary in a nearby town.

(via ijsselduo via Laughing Squid)

BTS: Photographing Jimadors in the Agave Fields of Tequila, Mexico

These Fire-Filled Light-Painting Photos Were Shot with a Smartphone