America’s largest newspaper publisher has laid off a large number of employees in recent days, but things appear to be quite rosy at the top. An internal team-building video has surfaced that’s raising quite a few eyebrows: it’s a parody of the LEGO Movie song “Everything is Awesome,” featuring company CEO Gracia Martore as the band leader.

Jim Romenesko got his hands on the clip, which you can watch above. 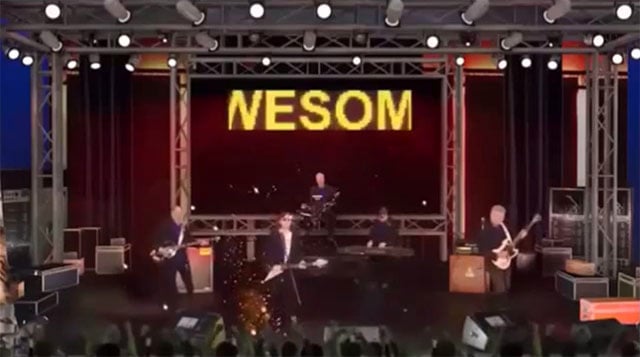 Mike, the reader who sent in this tip, writes: “As a former photojournalist myself, I love how they have money to produce bizarre videos like this as they cut staff.”

Here’s what people are saying about the video on Twitter:

No joke: Gannett CEO Gracia Martore 'performed' to a dub of "Everything is Awesome" during town hall broadcast to employees, I've been told.

(Note: Everything is NOT awesome at Gannett.)

FYI @Gannett: In the Lego Movie, this is a brainwashing anthem made by an evil corporation: https://t.co/IkEEljDvVp via @romenesko

The best part about Gannett execs un-ironically doing "Everything is Awesome" is that it's a song by a dictatorship http://t.co/jQrUVJNEP9

I, um. Oh, boy. I – YEESH – can't process this. / Gannett execs make "Everything is Awesome" parody: http://t.co/Fn6RsaqdLh via @romenesko

Everything is awesome, if you survived the layoffs! http://t.co/n6er3ZzI77

Mind blown. Gannett execs, who got big raises for laying off hundreds, sing "Everything is Awesome" in insane video. http://t.co/P5ydHCx0rj

No one on the Gannett exec team seems to possess a sense of irony: http://t.co/hAroa9dyW5

Everything u want to know about decline of newsmedia found in @Gannett surreal team building music video http://t.co/gJWypkD3KP cc @rafat

People have even begun posting parody videos of the parody:

So, unfortunately for Gannett, it seems like this idea backfired…