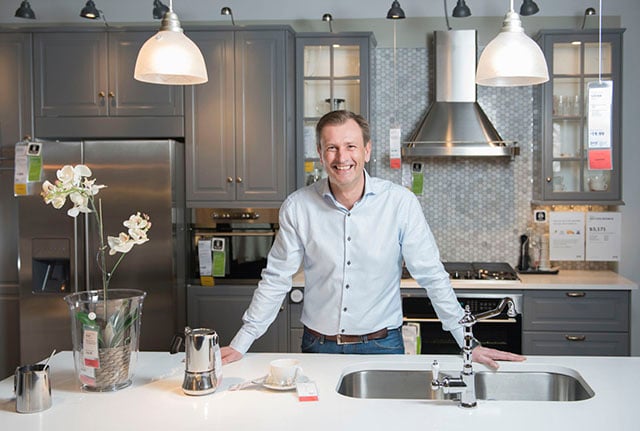 I recently had the opportunity to photograph IKEA Canada President Stefan Sjöstrand in the Winnipeg store. Long story short, I was stuck without my portrait lighting kit, so I ended up using one of their products as a makeshift diffuser to light him in the kitchen showroom area.

The assignment was for the Winnipeg Free Press, and going into it, I was under the impression it was a media tour led by the president (as they usually are).

I always keep a light portrait kit in the trunk of my car (3 light stands, a softbox, and two umbrellas all stored in a guitar bag), but since I thought it was a press tour, I didn’t want to carry the big bag with me over the 1.3km it takes to walk the store, so I left it in the trunk.

When everyone showed up, it was apparent it was just a one on one interview with reporter Geoff Kirbyson, and that I’d have a couple minutes to make a portrait of Mr. Sjöstrand in the store as well. You can’t ask the president of IKEA Canada to wait while you run to the car to retrieve your portrait kit bag, so I decided to get creative with the lighting with what was around me.

I could have used my Nikon speedlight on camera and bounced it off of the ceiling, or even used it off camera bounced off of a white wall, but I spotted a white opaque closet organization box that they sell, called the SKUBB, which looked like a perfect softbox. Here’s what the IKEA website says about the product:

1. You can even keep the storage case under the bed – perfect for extra bed linens, pillows or covers.
2. Protects your clothes and bed linen from dust.
3. Easy to pull out as the box has a handle on the side.
4. When you don’t need the storage case and want to save space, simply open the zipper in the bottom and fold it flat.

All I know is, that it has a zipper to keep it closed, which was perfect for throwing a hotshoe flash with transceiver in it. I zipped it shut, and asked an employee (IKEA calls their employees “co-workers”, which I’ve never fully understood) to hold the box for me, acting as a voice activated light stand (VAL). 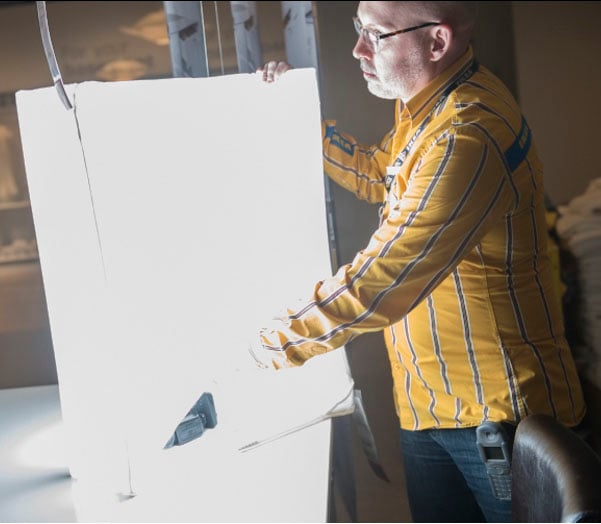 I placed one additional off camera hotshoe flash behind the president as a bit of a rim/separation light. I photographed him in both the kitchen as well as in the adjacent living room setup for a shoot duration of 4 minutes. Between shooting, we chatted quite a bit. He is a genuinely nice guy, and I found out firsthand that he has a lot of knowledge about professional hockey as a native of Sweden, and knew a lot about the original Winnipeg Jets V1.0. He was quite impressed with my ability to innovate with one of their products on the spot. I find that a large part of being a professional photographer is problem solving under pressure, and was pretty relieved that this box worked out. About the author: David Lipnowski is a photographer who has regularly worked freelance for many of Canada’s daily newspapers as well as major wire services such as Reuters and the Canadian Press. He also shoots commercial, PR, and wedding photography. You can connect with him through his website, Twitter, and Facebook. This article originally appeared here.

word.camera Turns Your Photo Into Paragraphs

My Last Word on the ‘Working for Free’ Debate