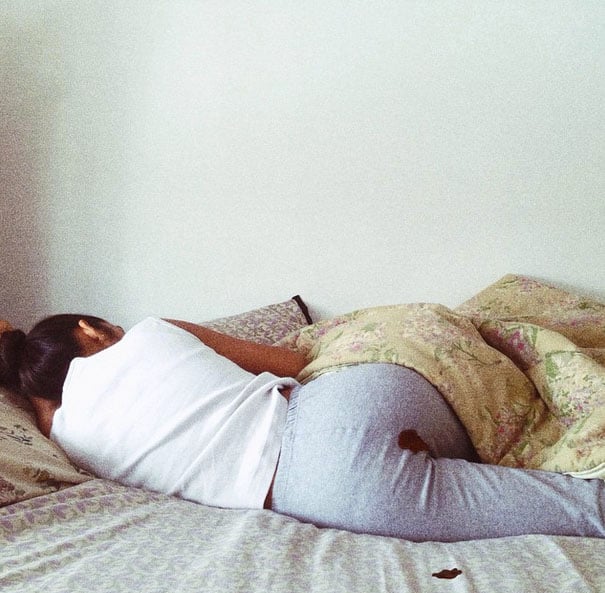 Instagram sparked controversy this week after deleting this photograph of a woman lying on a bed with menstruation blood seen on her clothing and on her sheets. She’s now demanding to know why other more graphic or risqué photos are allowed on the service while images of a fully clothed woman on her period are not.


The Washington Post reports that the photo was captured and shared by Rupi Kaur, a poet and artist from Toronto who’s currently working on a photo series about menstruation for a visual rhetoric course at the University of Waterloo.

The artist statement of her project says that the goal is to demystify and destigmatize the female body with “regular, normal processes” that should not be shamed or shunned.

Kaur says that her photograph was deleted by Instagram less than a day after she shared it on the service. Instagram provided a message stating that the photo violated its “community guidelines”: 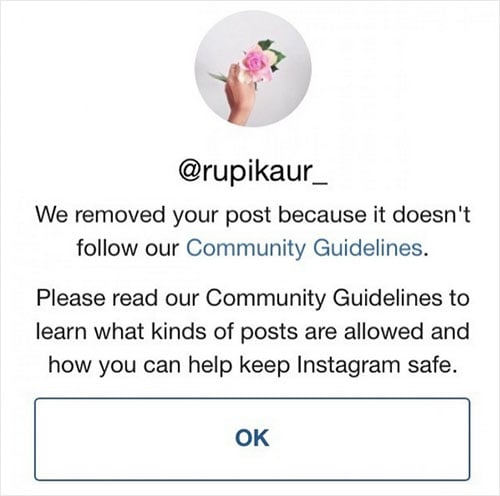 The artist then reposted the same photo, only to have it again removed by the service. In response, Kaur wrote an open letter to Instagram about the photo and its policies:

thank you @instagram for providing me with the exact response my work was created to critique. you deleted a photo of a woman who is fully covered and menstruating stating that it goes against community guidelines when your guidelines outline that it is nothing but acceptable. the girl is fully clothed. the photo is mine. it is not attacking a certain group. nor is it spam. and because it does not break those guidelines i will repost it again. i will not apologize for not feeding the ego and pride of misogynist society that will have my body in an underwear but not be okay with a small leak. when your pages are filled with countless photos/accounts where women (so many who are underage) are objectified. pornified. and treated less than human. thank you. ⠀⠀⠀⠀⠀⠀ ⠀ ⠀⠀⠀⠀ ⠀⠀⠀⠀ ⠀
⠀⠀⠀ ⠀
this image is a part of my photoseries project for my visual rhetoric course. you can view the full series at rupikaur.com
⠀⠀⠀ ⠀⠀⠀⠀ ⠀
i bleed each month to help make humankind a possibility. my womb is home to the divine. a source of life for our species. whether i choose to create or not. but very few times it is seen that way. in older civilizations this blood was considered holy. in some it still is. but a majority of people. societies. and communities shun this natural process. some are more comfortable with the pornification of women. the sexualization of women. the violence and degradation of women than this. they cannot be bothered to express their disgust about all that. but will be angered and bothered by this. we menstruate and they see it as dirty. attention seeking. sick. a burden. as if this process is less natural than breathing. as if it is not a bridge between this universe and the last. as if this process is not love. labour. life. selfless and strikingly beautiful.

The message has since been liked by tens of thousands of fellow Instagrammers. It also sparked a great deal of conversation about this subject, with news outlets from around the world drawing attention to the story.

The outcry eventually became so great that Instagram restored the photos Kaur posted and emailed her personally to apologize and to say that the photo had been removed by accident: 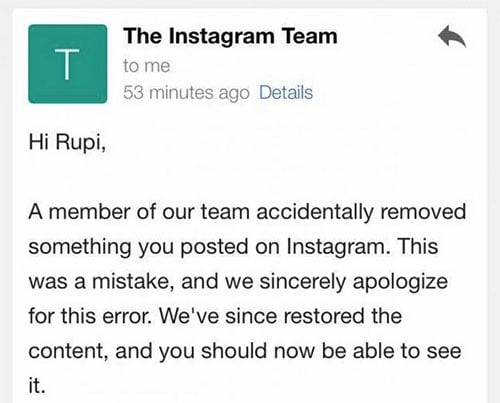 Kaur doesn’t buy it. “I truly don’t believe it was a mistake,” she tells the Washington Post. “A mistake once maybe, but twice?”

Facebook, which owns Instagram, recently clarified its community guidelines on what’s considered inappropriate nudity in photos. The company sparked controversy in the past by removing photos of breastfeeding or post-mastectomy scar photos, but it now says those photos are allowed. There’s nothing in the terms yet that cover a fully-clothed woman on her period, though.

Image credits: All photos and images by Rupi Kaur