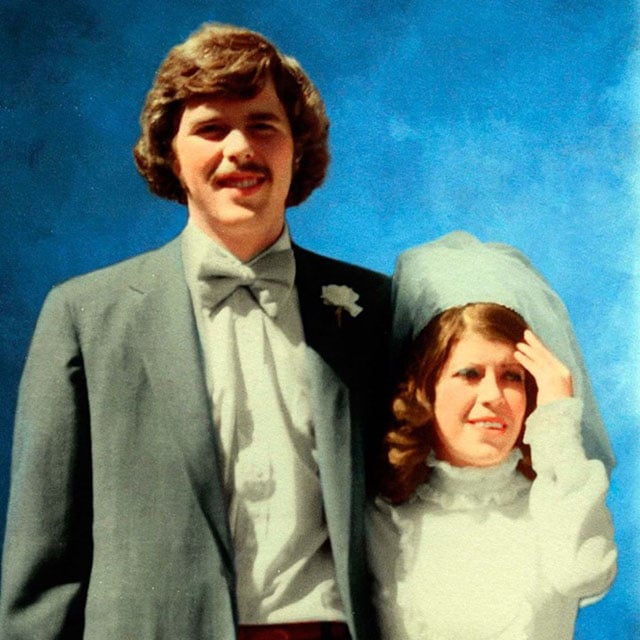 The picture above is the only photo Jeb Bush has of his wedding 41 years ago. Here’s why: Bush made the mistake of allowing his younger brother Marvin to be his official wedding photographer. Marvin, who was still in high school at the time, made the tragic mistake of rerolling already-exposed film.

TIME reporter Zeke Miller found more details about what happened in the book My Father, My President: A Personal Account of the Life of George H. W. Bush. Here’s what Marvin has to say about that day:

It was with that sense of heightened self-importance that I volunteered to be the photographer for Jeb and Columba’s wedding. Nobody really protested because the ceremony was small and relatively informal and Jeb and Columba were practically kids. So, if they were responsible enough to get married, then maybe I was responsible enough to memorialize the event for both families. Sounds good, right?

Rather than use prepackaged rolls of film, Marvin wanted to be a purist like the other photographers at his high school, so he rolled his own film — bad idea.

The cool thing with my fellow high school photographers was to roll your own film from spools that held hundreds of frames. It appealed to the “starving artist” mentality and was a sign of being a purist. So, in anticipation of Jeb and Columba’s wedding, I rolled a few canisters of film and packed them for Austin […] So, for the better part of two days I snapped way, naively imagining that Jeb would forever be grateful to his little brother for the beautiful photo album that would memorialize his special day.

Only afterwards, while processing the film in the darkroom, did Marvin realize the magnitude of his careless mistake:

The first moment of panic came when I was in the darkroom, reviewing the negatives from the wedding rolls. The frames seemed too congested with conflicting images. I was hoping that my eyesight was playing games with me, so I printed one of the frames. That’s when the real queasiness hit. As the paper settled into the chemicals in the tray, I began to see the image of a guitar over a picture of my grandmother and my parents. Uh-oh! It hit me like a ton of bricks. I had rerolled previously used film that had been taken at a Frank Zappa concert […] Every single photo of the Bush and Garnica families had either a photo of Frank Zappa and/or members of his band, the Mothers of Invention, superimposed onto their own images. I remember thinking to myself that a Frank Sinatra photo may have been acceptable–not Frank Zappa!

The story does have a faint (and humorous) silver lining. Marvin continues:

Luckily, my mother thought to take one picture of Jeb and Columba with her Kodak pocket Instamatic, and that photo, copied a few times over, is in scrapbooks and on coffee tables in Texas, Maine, and Florida.

The epilogue to the story, never previously revealed to any family members, is that I submitted a picture of the bride and groom (yes, with Zappa) in an art show at school. I called the picture something clever like “Zappa’s Bride” and won third prize in the photography category.