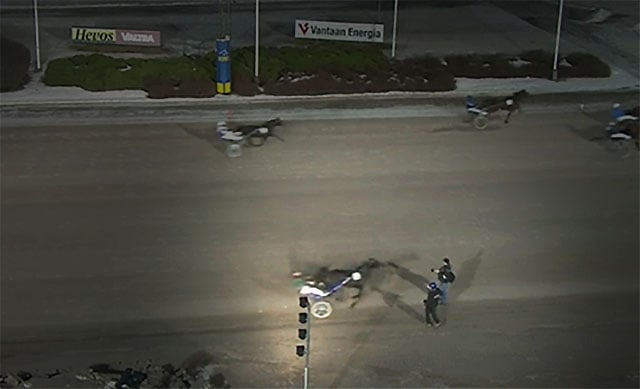 During a horse race, the track itself probably isn’t the place you should be wandering in order to snap the perfect action shot. Even if racers do tend to stay toward the inside of the track, things don’t always go as expected. A photographer in Finland learned this lesson the hard way this past week.

While photographing a harness race in Helsinki on Wednesday, photographer Pekka Salonen decided to step into the outer regions of the track to photograph the conclusion as the horses crossed the finish line.

Unfortunately for him, not all of the racers were racing on the inside, and he didn’t notice this fact until the moment before impact.

Here’s the replay of the entire race (the accident happens at around 3:10):

Thankfully, the accident looks worse than it actually was. Finland’s second largest newspaper, the Ilta-Sanomat, reports that Salonen spent the night in the hospital and was discharged the following day with only a broken collarbone.

“A horse is softer than a car,” Salonen tells the paper. Doctors were surprised at how (relatively) unscathed Salonen after such a violent collision.

The photographer also says that he has been photographing race finishes in the same way for 25 years. Hannu Torvinen, the driver who was riding the horse Laramie Point, apologized to Salonen, saying that his horse panicked and he didn’t have a good view of what was ahead.

After reviewing footage of the accident, the racetrack does not believe any rules were violated. It’s calling the incident an unfortunate situation, and says it will review its guidelines for photographers on the track.