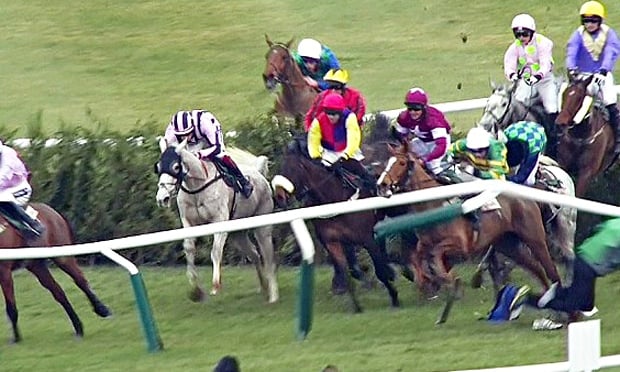 Less than a month after a photographer was knocked over by a horse and broke a collarbone at a race in Finland, a similar freak accident has just happened in England. A photographer broke his leg this past Wednesday after a horse knocked over the rail on the side of the track.


The Guardian reports that Cheltenham racecourse in Gloucestershire is now investigating the incident in which photographer Patrick McCann was injured. It was captured in the broadcast of the race by Channel 4:

McCann was standing behind the running rail on the side of the racetrack and taking pictures with his DSLR. A horse on his side of the track was forced into the railing as the group approached McCann, knocking the rail — and the photographer — over. The photographer did manage to capture (and later share) a couple of photos right before he was knocked down:

Nina Carberry and Quantitativeeasing are forced towards the rail after the second last #CheltenhamFestival pic.twitter.com/hL9HC0CUhB

McCann, an experienced horse racing photographer from Ireland, was admitted to a hospital and underwent a successful surgery for two broken bones in his leg.

The racecourse says that there is currently no concern regarding where McCann was standing and that it does not believe changes are required for where photographers should be positioned.