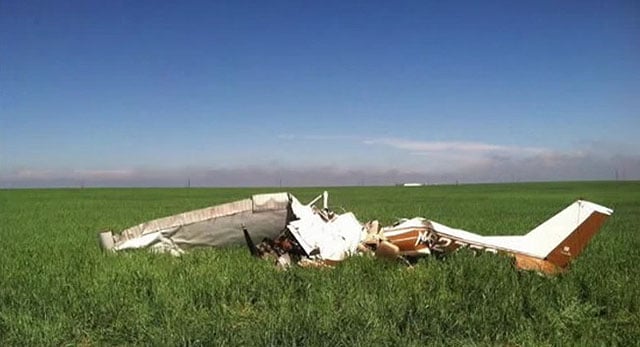 On May 31st, 2014, a small Cessna plane crashed in a field a few miles away from Denver, killing its pilot and passenger. The National Transportation Safety Board (NTSB) just published a report with findings from its investigation, concluding that the crash was most likely caused by the pilot becoming disoriented while taking selfies of himself.

In its report, the NTSB states that a GoPro was found near the wreckage with its files intact. The footage recovered from the camera shows the pilot, Amritpal Singh, snapping selfies with various passengers on the two days leading up to the fatal crash.

“[…] the pilot and various passengers were taking self-photographs with their cell phones and, during the night flight, using the camera’s flash function during the takeoff roll, initial climb, and flight in the traffic pattern,” the investigators write. “[…] it is likely that the pilot experienced spatial disorientation and lost control of the airplane.”

Here’s the agency’s official verdict on the probable cause: “The pilot’s loss of control and subsequent aerodynamic stall due to spatial disorientation in night instrument meteorological conditions. Contributing to the accident was the pilot’s distraction due to his cell phone use while maneuvering at low-altitude.”

(via Quartz via Resource Magazine)

A Look Inside the World’s First Photo Book from 1843

I Made a Super Bowl Commercial with Seven Photos