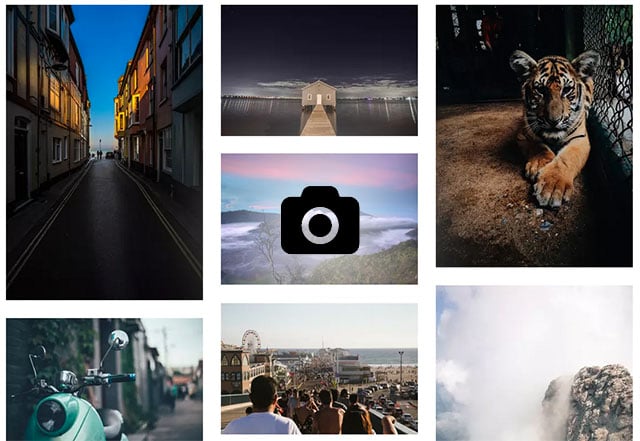 Launched back in 2013, Unsplash is a site which posts ten handpicked photos every ten days and these photos are absolutely free. By “free” I don’t mean “free to download” — they’re free to use everywhere and in any way you want. Commercially and whatnot.

Which is a great thing, right? Finally, a place with photos hip enough to use on a lifestyle blog or design agency’s website. I’ve seen hundreds of sites using them, including ecommerce. I’ve also seen them used in magazines, on T-shirts, in books and as prints. People are now earning money from unattributed Unsplash photos — everyone, it seems, but the photographers who took them.

It’s probably not what the founders of Unsplash intended, at least not initially. What started as an in-house side project, built to share some leftover photos from a session they did, kicked off when others started submitting really good photos, all for a chance to be featured. Since then the website became a hit, and not only in the startup community.

Unsplash became a great place to promote yourself as a photographer — if your submission got accepted, in return you got a high-visibility link back to your website. Add to that the snowball effect of Tumblr (on which the initial version was built) and the returns were really worth sacrificing your rights to a photo or two.

That’s how I’ve used Unsplash, too. I promoted my personal blog and got a lot of great feedback from people who visited it. Sometimes when people used Unsplash photos, they’ve linked to my website which drove some traffic to me, too. Everything changed for me when Unsplash team decided to move away from Tumblr and set up a new profile system for photographers. Now, clicking their name takes you to their Unsplash profile, full of photos they’ve posted that never got on the main page. The photos are free anyway and you can use them in any way you want.

Everything I’ve ever submitted to their website is now public domain (Creative Commons Zero) — the photos can be copied, modified, distributed, and used for commercial purposes without my permission. No, they haven’t asked me if I wanted my not accepted pictures to be visible. Neither they’ve asked if I wanted to create a profile on the website — they just did it all for me.

I’ve emailed Unsplash staff a while ago about my concerns — they answered that photos submitted to their website are forever royalty free — it doesn’t matter if I delete them from the website; after uploading them, I no longer have control over their use.

Until this day they haven’t developed a “remove” feature and they probably don’t care for it. As for creating profiles instead of direct linking to authors’ websites, they replied that their goal is to create a portfolio for every photographer posting on their website. Right, like Flickr or 500px — only that all the photos on a profile can be used commercially in every way possible, for free. Why pay anyone ever? Those photos just fall out of the sky, like a camera, gear and years of practice fell on those photographers one day.

Sure, it’s the photographer’s choice to post their work on the website. Personally though, I think artists hurt themselves by doing this — the more photos appear on Unsplash site, the less businesses will want to pay for photography, as they’ll get used to getting it for free. There’s only one winner — it’s the company named Crew who created the website and now earns money thanks to the fame they got. They don’t mind admitting it and are fond of their invention, as you can see in this article.

I don’t mind a utopian world where everything is free and everyone loves what they do. Our world is far from that and photographers, as well as designers, painters, web developers etc. have to earn money with their creativity, often striving with demanding and stingy clients. The photography business is especially tough right now, with thousands of people learning the skill and fighting for their success, as companies still think paying for photography is a waste of money. I worked assisting professional photographers and I heard them complaining about it all the time.

Some clients say there’s no need to develop the raw digital pictures, as they “want them look natural”. Others claim that photographers are too expensive and their kids can take the same pictures with a point-and-shoot or even a camera phone. And then there are folks who don’t even care if the photo fits their website or branding, unless it’s free.

If you work in the creative industry, bargaining for the price, dealing with demanding clients and explaining to everyone that you actually spent time on your work probably sounds just too familiar. The photography world isn’t different.

Unsplash isn’t helping the photographers sell the photos or even promote their work. To me it seems like they’re on a path to make everyone believe they don’t have to pay for photography anymore. Every day I see Unsplash photos being used and abused literally everywhere.

I know photography lost its value to some, as millions of pictures are taken every day. Still, they’re an intellectual property and are works of art which should be respected, paid for (like you pay for fonts or website templates) or properly attributed. Behind every picture there’s a person who spent their time producing it.

Everyone, including the Unsplash founders themselves, seem to forget that all the value is contributed by photographers themselves. Not the Unsplash team, who just curate the submissions and reap the rewards, but by artists who want to promote their work and eventually sell their photography.

By removing that element, Unsplash, bloggers, magazines, publishers, companies and all others who use photos commercially, are actively hurting professional photography industry in the worst way possible: by undermining its relevancy. And doing this is the first step to harming the whole creative industry.

About the author: Aleksandra Boguslawska is a photographer, traveler, and blogger based in Cracow, Poland. She runs Tails of Wonders, a travel inspiration, culture, and adventure blog. This article originally appeared here.

BelfieStick: A Dedicated Product for Snapping Hard to Reach Selfies of Your Butt