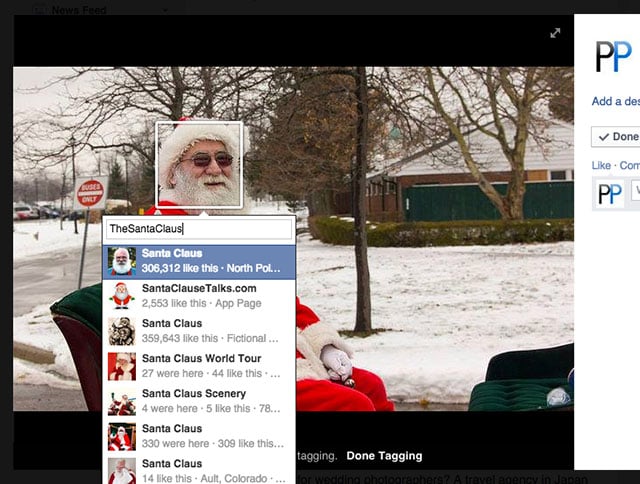 Here’s a note caution: when tagging Santa Claus in your Facebook photos, make sure you tag the right one.

Photographer Brian Matus had a strange experience this past weekend after tagging Santa in three of his holiday photographs. He tells us that shortly after doing so, he received a “legal notice” in his Facebook inbox.

Here’s the note that Matus shared with us:

LEGAL NOTICE: As a photographer, you should know that tagging me is a violation of my right of publicity and usage rights.

I am not in your photos; however, my legal name is Santa Claus, and you are specifically tagging me and my Facebook page – misrepresenting that I am depicted in your photos. As a SAG-AFTRA member, I am well aware that it is a violation of Federal Trade Commission regulations to tag me to your work.

Please do not tag me again on Facebook or anywhere else. My only option, other than making this request, is to have Facebook take down any photos you post tagged “Santa Claus” that refer to me or my Facebook page, as is my right under the Digital Millennium Copyright Act.

Thanks, in advance, for your cooperation.

Matus quickly changed out his tags on Facebook, but the legal notice didn’t sit well with him. He tells us:

Rights of Publicity are under the jurisdiction of state law, not the FTC, and not all states recognize them.

A photographer owns the copyright on his work unless he signs a contract stating otherwise, so all “Santa” can do is file a fraudulent DMCA takedown notice. Not that this won’t result in a knee-jerk takedown, just that he would be committing fraud when claiming copyright of someone else’s work.

If you do try and tag the imaginary (gasp!) Santa in your photos, be sure to tag the Facebook page for the fictional character.

The real Santa Claus has not yet responded to our request for comment [Update: See below].

Update: Facebook does allow tagged users to remove tags of themselves from other people’s photographs. Matus says that the tags were removed by Claus prior to the message being sent.

Update: It appears that the real Santa Claus has responded in the comments below:

Facebook removed the photo because it violated my federal rights under the Digital Millennium Copyright Act and Facebook’s own policies. Had Matus just written ‘Santa Claus,’ without of tagging me, personally, there would have been no violation. I did not appear in Matus’ photo and did not want to be associated with the image.

My Workflow: How to Stay Sane While Working as a Music Photographer on Tour