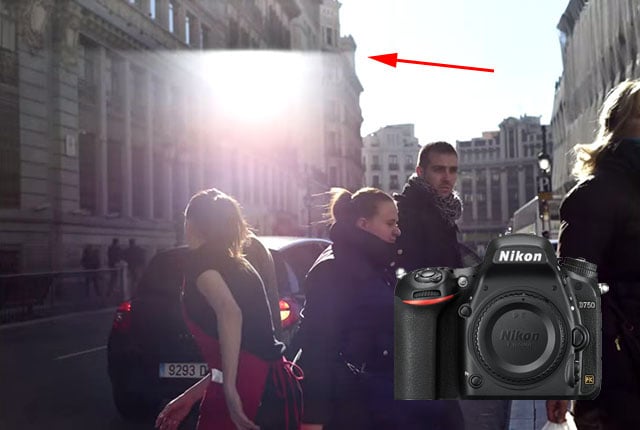 The Nikon D750 full frame DSLR has been receiving fantastic marks from reviewers so far, but now an issue has popped up that threatens to damage the camera’s reputation. Photographers around the world are reporting a problem with their lens flares. At certain angles, an ugly dark band shows up across the top, separating lens flares from the edge of the frame.

Here’s a video in which a YouTube user named Blue Planet shows the phenomenon:

The issue can be eliminated/ignored if you use a lens hood to prevent lens flares, but that’s not a good solution for photographers who often use lens flares artistically in their shots. Here’s an example of an affected shot by photographer Hugo Hernandez:

Do a search on YouTube, and you’ll find a number of other videos posted by photographers trying to bring the issue to the attention of others:

There have also been a number of forum discussions on this subject starting from a month ago. More recently, some photographers believe that they’ve figured out what’s causing the issue.

The culprit is apparently the autofocus sensor module at the bottom of the D750’s mirror box. On cameras in which this issue is occurring, the sensor unit protrudes from the bottom more than it does on cameras that are fine. It appears the protruding sensor affects how the light reaches the sensor.

A photographer named Tomasz Piotrowski did some tests on his D750 cameras. Here’s a video showing the differences he found in the mirror box between good and bad cameras:

To test this theory, Piotrowski placed a black strip across the top of the sensor module in order to remove internal reflections. Voila! The issue magically disappeared:

Nikon has not issued any official statement on this issue yet, but we’ll be sure to update you if/when they do (we’re guessing it won’t be long).

How I Created This Viral Puddle Reflection Picture in Photoshop

Heavenly Photographs of Dubai Skyscrapers Poking Through a Sea of Clouds