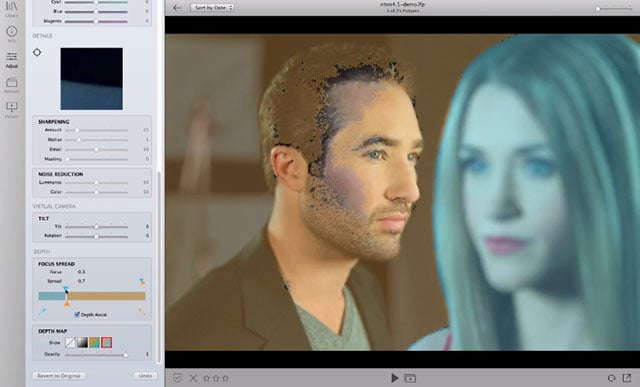 Lytro has released Version 4.1 of its desktop light field photo editing software, and one of the main new features is something called “Focus Spread.” It’s a revolutionary feature that takes advantage of Lytro’s “shoot now, focus later” abilities, giving photographers the ability to control where focus starts and stops in a photo.

Say you want to photograph someone with the background completely out of focus. Easy right? Just open up your aperture as wide as it will go, focus on the subject, and voila!

But what if there’s a second subject a certain distance away in the background, and you want both subjects to be in tack-sharp focus? That’s the type of situation Focus Spread is designed for.

A traditional way to do this with DSLRs would be to capture multiple shots at different focal lengths and then stack them into the shot you want. It works, but it’s time intensive and requires some know-how.

With Lytro’s new feature, all you need to do is drag a new slider found in the editing program. It breaks the depth of field into three components (foreground, subject, and background) that you can fiddle with in your shot.

This lets you show multiple subjects at different depths in f/16 sharpness while maintaining a foreground and background that shows f/1 blurriness.

Here’s a video that shows off what the new feature can do:

Lytro Desktop 4.1 is available for Windows and Mac OS X for free through the Lytro website, but you’ll need to own a $1,599 Lytro Illum light field camera to take advantage of it.

From Above: Astronaut Don Pettit on the Experience of Photographing Earth from Space