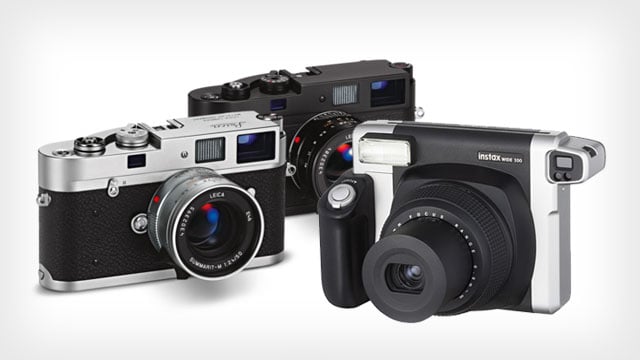 Two recent camera releases have me scratching my head. The first is the M-A, the latest model from Leica. The primary selling point seems to be that this is a completely mechanical camera. No battery, no meter, no LCD, no autofocus, no frills. What the camera lacks in modern features it makes up for in mechanic precision and simplicity. Instead of busy screens you “read the shutter speed and aperture directly from the camera and lens and so fully concentrate on the subject.”

OK, fine. Great. But how is the M-A any improvement on the long line of Leica predecessors? To me this looks like an M3. The key difference is the price. The M-A’s suggest retail is $5,100. In comparison a used Leica M3 in good condition — basically the exact same camera — will set you back $800 tops.

Given those specs, why would someone buy the M-A? Or for that matter the MP which came out just before it? Is it something to do with new products and having the latest thing? That’s the only reason I can think of, but unfortunately that world makes very little sense to me. So this one has me stumped.

To add one more layer of absurdity, the camera comes packaged with a roll of Tri-X! I guess it’s meant as a complete starter kit, ready to use out of the box. The new owner needn’t waste time and hassle finding film. I’m not sure if the film is preloaded but that would be yet another time saver.

Or maybe the idea is that using any film aside from Tri-X will cause the body to implode? Not that any of it matters, because I bet 6 months from now that same roll of Tri-X is going to be stuck in this camera as it sits on a shelf collecting dust.

If I was more cynical I would attribute the M-A to a cruel joke by Leica: Strip features, throw in a $3,000 roll of film, and see how many suckers bite. At this rate their next offering will be a simple block of wood with Leica stickers and a roll of Tri-X drilled into the side. The sad part is, someone out there would probably buy that block of wood. And in 6 months the roll would still be inside..

The other new release I can’t figure out is by Fuji. They’ve been on a roll lately, and have come to dominate the instant film market abdicated by Polaroid. Forget Impossible Project. Fuji is king. They make a good product for a reasonable price, and it’s more addictive than crack cocaine. Every time I shoot people with my 210 the question is the same: Where can I get one? Fuji should be riding this horse for all it’s worth, pioneering new Instax products left and right. Instead they’re asleep at the wheeeeeeeeel.

I’m talking about the Instax 300, the long awaited update of the Instax 210. It’s due next spring.

When I first heard the rumors I was ecstatic. I love my 210 to death but it’s fully automated. It does what it wants. Sometimes that’s the same as what you want but just as often it’s not. That can be a problem. Wouldn’t it be wonderful to manufacture a camera in the same format but with more features, one that the user could control? Most cameras have those controls nowadays. Surely the Instax 300 could incorporate some of them?

Most of us Instax users have been waiting for that camera for years. Now finally, here it is and… it’s pretty much the same feature set. The 300 does exactly what the 210 does, no more, no less. It has two focus settings, a dumb flash, no aperture or shutter controls.

There are a few differences. The new model is slightly lighter, twice as expensive, and three times as ugly — and the 210 set a pretty high bar for ugly, so that’s saying something. Looking at the 300 body, you wonder if Fuji hired away some of the design talent from 1980s Detroit.

At the same time they’ve developed this new camera, which offers no meaningful improvement, Fuji has discontinued the cool border designs which lent beautiful chaos to their Instax film line. So now your photos don’t have to work as hard to be boring.

Oh well. I guess it makes sense. Most of the creative energy for camera companies goes into digital products. Film products get the design dregs. So it’s not very surprising to see film products hit the eddy rather than flow downstream. If you can sell a 1950s camera for 2014 prices, why not? And if you don’t understand the underlying market dynamic for your camera, you won’t push its envelope. I may not like it, but I get it.

It’s probably just as well. The last thing I need this holiday season is to be tempted to buy more s**t. My cameras work fine. I’m good. But I’m scratching my head.

Relio: A Tiny Light That Aims to Be the Most Powerful and Color-Accurate USB Light on the Market