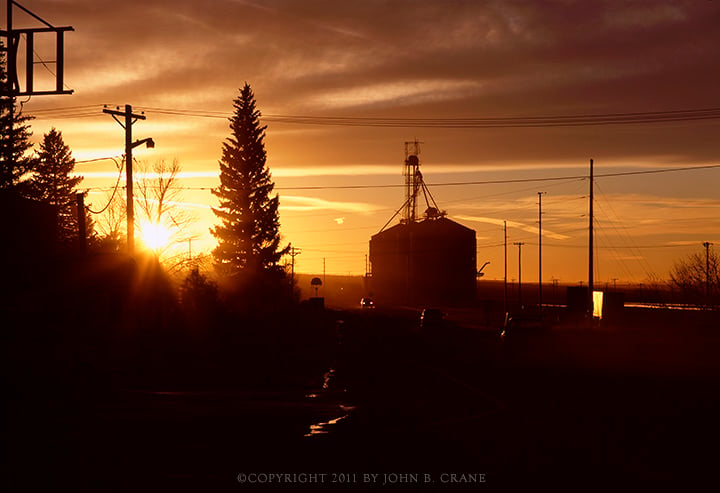 Pine (Bluffs), Wyoming lay at the extreme south-eastern corner of the state, a stone’s throw from Nebraska along the Old Lincoln Highway and I-80. My visit to Pine was late in the year with my dog Henry. Over the course of several months we’d seen Henry begin to slow and knew he’d begun his journey home. Not wanting to miss any opportunities with him I took the Jeep this trip, knowing he’s more comfortable than in the front seat of the Subaru.

We parked at an I-80 rest area and took an hour-long hike on packed snow and frozen mud to the bluffs overlooking Pine. He labored only slightly, happy and excited to sniff new ground with tail wagging. We climbed back in and continued east along the Lincoln Highway. It was on this trip I was to meet the opposite of the wonderful folks of Nebraska, and catch my first whiff of danger in the region.

Bushnell lay a short drive east of Pine. It was a sunny, pleasant afternoon. The wind had lain down just enough to actually allow Autumn air room to breath. We did a few laps through the small, mostly abandon town and stopped to make some photographs. Henry was content in the back seat as I popped in and out of the car, occasionally opening the back door where he’d slide out into a field, wandering and sniffing as I worked. Getting him back into the Jeep was a little humiliating for him. At close to 100 pounds and not much help to himself he’d look at me, ears lowered, knowing what came next. I encouraged him as I lifted and we managed alright.

Near the end of the day in a remote corner of town I’d stopped along a public, dirt road and climbed out to consider making an image. The light was getting nice and the sky was active. Henry remained in the car, the back window fully down, his head hanging out, watching. About then is when I saw a large, Carhartt-clad figure approaching from the distance. With his head lowered, hands in pockets and a distinct and deliberate gate – I could tell he wasn’t relaxed. My first thought was to get back in the car and carry on, but not wanting to flee, I resisted.

When two strangers approach on a lonesome stretch of road with no others around and darkness coming, the meeting could go any number of ways. We were both heading for life lesson.

When he got within comfortable speaking distance, the wind still quiet, I offered a casual “how are you today?” It was met with a nod, then a glare.

“What do you think you’re doing,” he asked as he approached to within 3 feet and stopped.

“I’m thinking about making a photograph,” I said. “Hi, my name is John Crane,” and offered my hand. Carhartt spit on the ground, turned his head sideways, raised his chin slightly and closed one eye and said, “Is that supposed mean something to me?”

Right about then several scenarios ran through my head. Part of my greeting was designed to expose his hands, revealing what they held. This failed – with hands remaining buried in his coat pockets. I withdrew my hand and smiled. “Nope,” I said. “Just being polite.”

“Oh, I am not a cordial man,” he replied. Then began a dissertation informing me of his version of Nebraska law; ‘the world according to Bushnell Carhartt.’ I listened without emotion. When he finished he nodded to my Colorado license plate and looked at me with the same, one-eyed squint. Taking half a step towards me said, “we don’t like your kind around here… you’d best just go on home.”

Now, we all have different personality traits – things that trigger different responses. Some people are affable, fun-loving, happy-go-lucky types. Others are nervous, high-strung and jittery. I’m pretty easy going and do my best to live in accordance with Biblical principles – but God’s not finished with me yet and the numbers one and two hot button issues with me are bullies and intimidation. Especially when they’re not in possession of the facts – or the truth – and are skewing events to support their mission: to bully and intimidate. I hate bullies, of any size and shape, and won’t stand for it.

Henry knew something was up and I glanced his way. The ears on his large, black head were alert and he was sitting up taller in the front seat. Carhartt’s hands were still in his pockets and I took a step forward and said, “I’m pretty sure I can do what ever I want.”

Carhartt looked up, clearly not expecting that response, and casually took half a step back. “This is a public road,” I continued, and I’m not infringing on anyone’s privacy being here. Is this your land?” I asked, going on the offensive, nodding to the grain bin along the road.

“It doesn’t matter,” he said. “You’re not supposed to be here and no one has given you permission to take a picture.”

“I don’t need your permission to make a photograph on public land,” I said, not backing down.

“You’re stealing,” he said, “you’re ‘taking’ something when you ‘take a picture.’ You’d better be careful,” he threatened – now beginning to walk backwards, away from me, hands till in his jacket pocket.

At this a low growl emerged from the Jeep.

The sudden emergence of unmistakable ignorance changes everything. It’s at that point you realize further discussion is pointless and – one way or another – it’s best if the conversation simply ends.

“I’m pretty sure I can do whatever I want,” I repeated, my intonation unequivocally final. By now Henry was half out the Jeep’s window as Carhartt slowly began his retreat.

“Have a wonderful day,” I said, sensing victory.

What happened next has been a source of regret since. Carhartt’s back shown to me, Henry behind me, I added, “Can I make a photograph of you?”

“No you may not,” he said without turning around. I watched him as he strolled back to the mailboxes at the foot of his driveway a few hundred yards away then disappeared towards the shed.

I was shaking and wanted nothing more than to get out of there. He’d ruined the day. Up until that exchange I’d had a wonderful time, interacting with another couple in town, even making their portrait in the Antique Shop they’d recently purchased and had begun to remodel. It was all gone now because of this guy. I walked back towards the car, replaying the encounter in my head and realized Carhartt never removed his hands from his pockets. He’d probably been holding a gun the whole time. Shaking now, I climbed back into the drivers seat and sat for a moment – but couldn’t leave. Not just yet. He’d have accomplished what he’d set out to do if I didn’t stay long enough to finish my work.

The railroad ran through town, which always makes for interesting subject matter. I spent another half-hour shooting around there, making very certain to remain on public land. When I was finished I packed up and headed out.

I’m not proud of how I responded to this encounter. The drive home offered a lot of time to rehearse more kind, patient replies – that I’ve since forgotten. Later that evening upon arriving home I told my wife and son about the day – all of it – and realized I wasn’t setting the example for my son I’d have liked. This was humbling. I thought briefly about returning the following weekend to his home, knocking on the door and apologizing. I then remembered his hands buried in his pockets and realized I’d actually have to be on his land to do so – and reconsidered.

This 111,000 square miles of “The 4042n West” is big land. If and when things go sideways you’d better have a plan. This event began the process of considering a hand gun and concealed weapons permit – only not concealing it. In the future, allowing a weapon to be visible to all who wish to approach and say hello seems a good way of attracting the right kind of folks.

I’ve always been what I’d consider a socially responsible photographer. The last thing I want to do is stick a camera in the face of the unwilling to provoke such a response as was that of Carhartt. That said, no matter how hard you try it simply isn’t possible to anticipate every unpleasant encounter. One could elect to not risk visiting other small towns, but these people don’t just live in small towns. They’re everywhere. The truth is for every unpleasant encounter there are many others of the opposite nature. Allowing one bad apple to unduly influence decisions wouldn’t be right. Images from the day were mediocre, but the lesson grand: pay attention, keep your wits about you and know the law. Having a big, black dog doesn’t hurt, either.

About the author: John B. Crane is a photographer, illustrator and 3D animator living and working in Fort Collins, Colorado. When John isn’t sitting in front of the computer creating complex technical and industrial 3D animation projects for clients around the world, he may be found roaming the Rocky Mountain West in his Subaru, old film cameras in hand, refocusing his eyes, enjoying the solitude and beauty the West has to offer. Visit his website to view a complete catalog of images. This story originally appeared here.