Memphis Grizzlies guard Tony Allen got a little carried away last week when, after committing his third foul, he decided to take out his frustration by smacking Bo Bradley’s camera as he was capturing the action — an act that is going to cost him.

Bo Bradley was working his freelance job as a cameraman when a frustrated Allen came over and took out his anger on the innocent camera (and its operator). The eyepiece of the camera managed to smash into Bradley’s eye a bit, but he tells WMC Action News 5 there were no cuts or bruises. 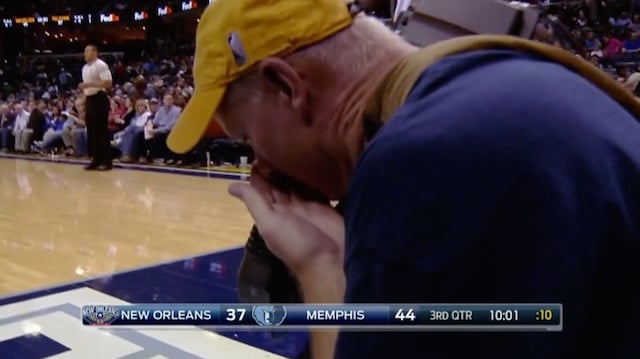 In fact, there were no hard feelings at all. Allen motioned an apology to Bradley later in the game, Tweeted an apology later that night, and the two even caught up in person on Tuesday afternoon for an official apology.

Both Bradley and Allen seemed happy with the results of the one-on-one meeting, with Bradley mentioning that he accepts Allen’s apology and realizes that it’s something that just happened in the heat of the moment.

Despite all this, NBA President of Basketball Operations Rob Thorn still decided to levy a pretty hefty fine on Allen. So if you’re wondering what it costs when an NBA player takes his frustrations out on a camera man, the answer is a cool $15,000.