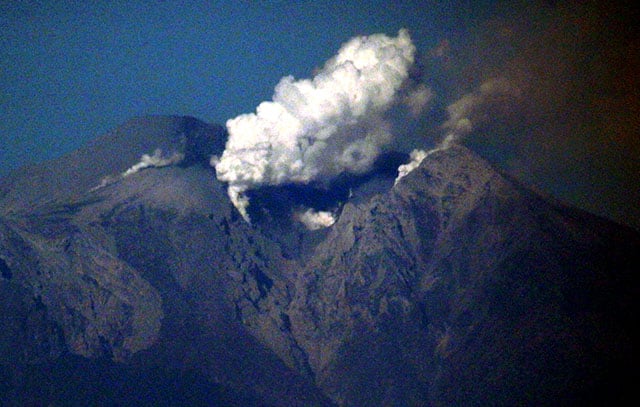 On September 27th, 2014, Mount Ontake in Japan erupted and began spewing ash. A popular destination for tourists and beginning hikers, several hundred people were reportedly on the volcano at the time. At least 56 of them didn’t make it off.

Now, in the aftermath of the disaster, damaged cameras and phones are yielding photos that offer a glimpse into what things were like on the slopes just moments before the rumbling began.


The Japan Times reports that one of the cameras recovered belonged to a young coupled named Yuki Tokoro (26) and Yuki Niwa (24). Tokoro’s Nikon compact camera was twisted and mangled on the outside, but somehow the memory card inside survived and preserved 48 photographs within.

One image shows the couple smiling and posing at the summit of the volcano, and the last image on the card was captured just seven minutes before tragedy struck.

According to Mainichi, the photos were first discovered by Tokoro’s father, who used a metal wire to clear away debris in order to extract the card from the device. The images are helping to reconstruct the couple’s last moments, and are helping to give the victims’ families some comfort and closure.

Tokoro’s camera was just one of many discovered in the ash. The Associated Press reports that a construction manager named Izumi Noguchi also left behind a damaged camera that contained an undamaged memory card. His wife, printed out all 100 images discovered on the card — the last of which shows a huge plume of ash — but says she wishes her husband and focused on running away rather than taking pictures.

An iPhone belonging to 41-year-old victim Hideomi Takahashi was also discovered. It contained at least six photos showing the last moments of Takahashi’s life, with the last photo showing Takahashi proudly standing at the summit.

Takahashi’s friend Hiroyuki shared some of the images on Twitter after the images were discovered (he since pulled the Tweets after receiving criticism).

These cases are reminiscent of Robert Landsberg’s photos of the eruption at Mount St. Helens. As you might remember, Landsberg, knowing that he wouldn’t be able to outrun the eruption, finished shooting his photos and then used his body to protect the film.

P.S. On the video side of things, some haunting footage was captured by a survivor who fled and by a CCTV camera some distance away: