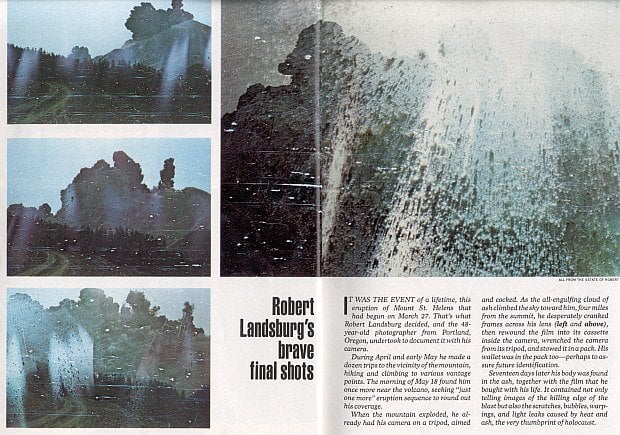 When Mount St. Helens erupted on May 18, 1980, photographer Robert Landsberg was documenting the changes in the volcano from just a few miles away. Realizing that he couldn’t possibly outrun the approaching ash cloud, he kept shooting for as long as he could before using his body to preserve his film:

He managed to rewind the film back into its case, replace his camera in its bag, put the bag in his backpack, and then lay himself on top of the backpack in an attempt to protect its contents. Seventeen days later, Landsberg’s body was found buried in the ash with his backpack underneath. The film could be developed and has provided geologists with valuable documentation of the historic eruption. [#]

The photos were published in the January 1981 issue of National Geographic. Many people might think of saving their precious photos in the event of a house fire, but how many photographers would think to use their bodies to protect their photographs?