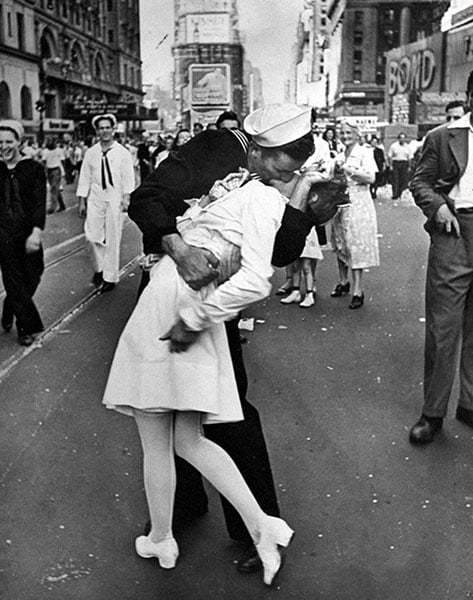 Feminists in France are demanding that a statue based on Alfred Eisenstaedt‘s iconic ‘VJ-day in Times Square’ photo be taken down. They say that the original image it was based on is one that portrays sexual assault.

The statue, created by J. Seward Johnson Jr., shows a sailor kissing a woman in a white dress to celebrate Victory over Japan Day. It currently sits in front of the Caen Memorial Museum in Normandy.

French feminist group Osez Le Feminisme is currently trying to get ‘The Kiss’ statue removed, complaining that it represents sexual assault. Here’s what Eisenstaedt said about the scene:

In Times Square on V.J. Day I saw a sailor running along the street grabbing any and every girl in sight. Whether she was a grandmother, stout, thin, old, didn’t make a difference. I was running ahead of him with my Leica looking back over my shoulder but none of the pictures that were possible pleased me. Then suddenly, in a flash, I saw something white being grabbed. I turned around and clicked the moment the sailor kissed the nurse. 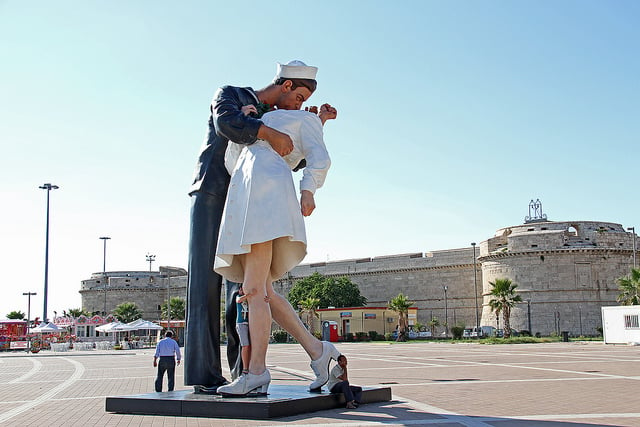 A spokesperson for Osez Le Feminisme issued a statement saying,

‘We cannot accept that the Caen Memorial erected a sexual assault as a symbol of peace. We therefore request the removal of this sculpture as soon as possible […] The sailor could have laughed with these women, hugged them, asked them if he could kiss them with joy. No, he chose to grab them with a firm hand to kiss them. It was an assault.’

Stephane Grimaldi, the director of the Caen Memorial Museum, countered, saying that Greta Friedman, one of the three women who claimed to be the woman in the photograph, has said before that she never considered the incident to be assault.

Feminist countered, arguing that Friedman has also been quoted as saying that she was unable to escape the moment.

Despite the complaints, the museum is saying it has no plans to remove the statue, which is set to stay on its premises on loan for another 12 months.

Director Featured in Canon Ad Says He Used Sony, Tells Canon to Get ‘Its Facts Right’