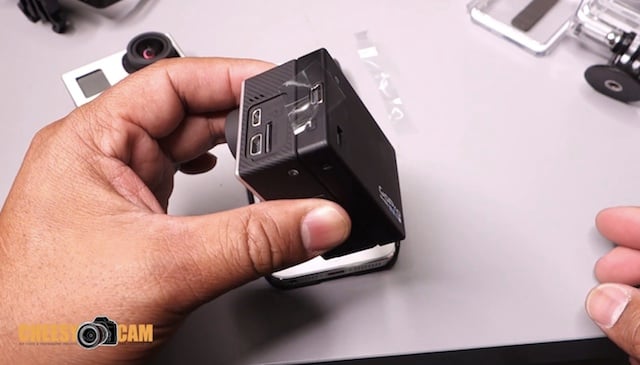 If you’re in the market for a GoPro Hero4, and especially if you’ve already purchased one, listen up, because there seems to be an overheating issue with some of the cameras that could potentially be dangerous.

The issue was discovered and reported on by the folks over at CheesyCam, who noticed that their brand new GoPro Hero4 was heating up to a dangerous degree when it was attached to a brand new Battery BacPac accessory.

But when that same bacpac was attached to an older GoPro Hero3+, it ran cool:

This begged one final question: was the problem that this particular battery bacpac was defective and somehow incompatible with the new Hero4 model — keep in mind, this is a brand new, higher-capacity bacpac ordered straight from GoPro — or was the Hero4 the issue?

One final test gave CheesyCam the answer they were looking for. After going out and spending $500 on yet another Hero4, they tested the bacpac on both, and the results are both surprising and troubling: one heated up while the other didn’t.

It seems that one of the Hero4s but not the other is causing the bacpac to heat up very hot. In fact, in as little as three minutes it got hot enough to distort a small piece of plastic that they placed on top of the bacpac.

Of course, it is entirely possible that this is a problem that ONLY exists for the particular camera that CheesyCam first purchased, but that seems unlikely. More likely, a subset of serial numbers are somehow incompatible.

CheesyCam still hasn’t heard back from GoPro support, but we’ll update this post if and when there’s an official GoPro response to the issue. For now, if you have a Hero4 and you’ve purchased a bacpac for some extra juice, we suggest you give it a good long test-run before you take it out into the world. If it’s distorting plastic at three minutes, 10 or 20 minutes could be dangerous.

And if you’ve experienced any similar problems with your new Hero4, drop us a line in the comments and let us know.

Watchtower of Turkey: 2,200 Miles in 20 Days Condensed into a 3-Minute Visual Treat