Oh the places you’ll go… Dr. Seuss may not have written those words to humankind as a whole, but he may as well have. As the ESA and its Rosetta Spacecraft prepare to land, for the first time ever, on a comet, this image serves as an awe-inspiring reminder of the places we’ve already been.

Namely: An asteroid, the Moon, Mars, Venus, Titan and, of course, our own mother Earth.

Put together by NASA’s Jet Propulsion laboratory, the infographic (which you can see in full below, or at full-res by clicking here) shows you, to paraphrase, “oh the places we’ve been…” 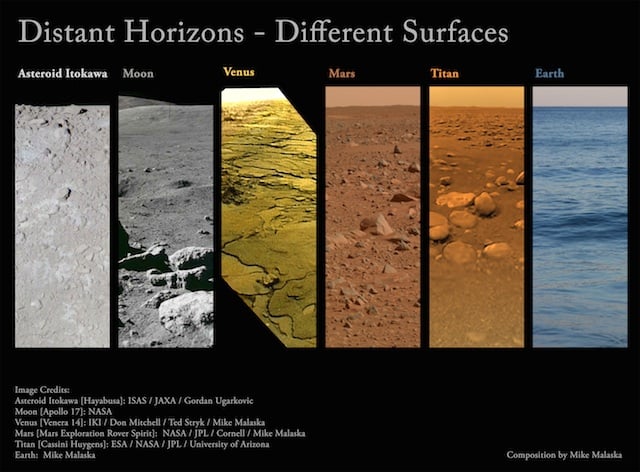 The photo of Asteroid Itakawa we owe to Japan and its Institute of Space and Aeronautical Science (ISAS), and the similarly gray image of the Moon was the doing of the Apollo 17 astronauts. The photo of Mars’ surface above is the doing of the NASA’s Spirit Rover, and the image of Earth was taken by organic chemist Mike Malaska.

The last two are the most interesting: Saturn’s moon Titan and our inhospitable neighbor Venus.

The image from the surface of Venus was taken by the Soviet Union’s Venera 14, which survived a whopping 57 minutes — almost a half hour longer than expected — at a temperature of 869 °F and pressure of 94 Earth atmospheres.

Finally, the surface of Saturn’s moon Titan was captured by the well-known Cassini spacecraft’s probe Huygens. In 2005, Huygens marked humankind’s first landing on a body in the Outer Solar System when it parachuted down to the surface of Titan and started taking pictures.

Comfort Objects: Portraits of Children and the Dolls, Blankets and Stuffed Animals They Hold Dear