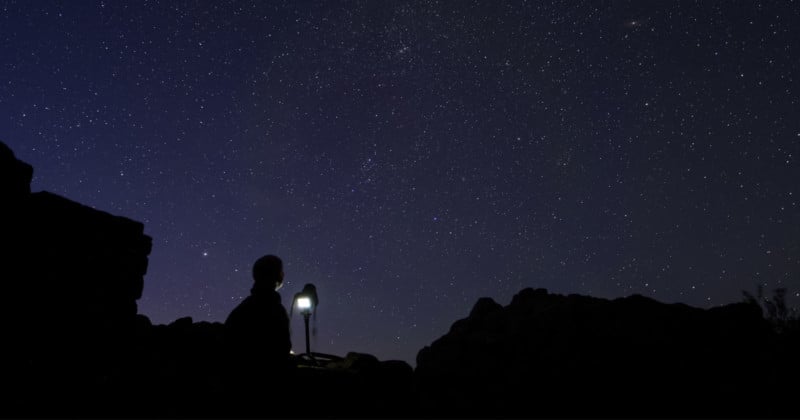 Starting in April, the northern hemisphere will be treated to an alignment of up to five planets and the moon, all visible together. Planetary alignments, especially at this scale, aren’t common and could prove to be an excellent photo opportunity.

2022 is, generally speaking, a rather quiet year for astronomical events, but over the course of about two months, astrophotographers will be graced with an uncommon grouping of four planets from the Sol system, all visible at the same time in the night sky.

Starting in late March and extending through May, there will be multiple opportunities to capture either a cluster or an alignment of planets in the night sky of the Northern Hemisphere. For the sake of simplicity, this article will cover the event as it would be seen in the United States, but specific information on how the event will appear can be generated using Stellarium Web, an open-source browser-based planetarium that allows interested parties to pre-plan astronomical viewing events.

Similarly, all the images below were generated using Stellarium Web. While four planets are visible through this time, technically a fifth is also present: Neptune. Unfortunately, while it should be visible with proper tools, it will be more difficult to see with the naked eye, especially when compared to the brightness of Mars, Saturn, Venus, and Jupiter.

As noted by AccuWeather, Mars, Saturn, and Venus will cluster together starting at the end of March. At this point, the trio of planets will be very close together and will be visible with the naked eye as well as through telescopes, binoculars, and cameras.

Technically visible together as early as March 25, the cluster is closest together by March 31. The timing of the three planet’s visibility depends on location. For example, in Portland, Oregon, the three won’t appear above the horizon line until after 5:30, with decent separation from the horizon not occurring until about 5:50 AM.

In Los Angeles, the cluster becomes visible earlier in the morning, at about 5:00 AM. Moving east, the cluster’s visibilty happens earlier. In Dallas, Texas, expect to get a good view by 3:45 AM. In Indianapolis, Indiana, 3:20 AM provides a clear view. In New York, it’s even earlier: about 2:30 AM. This schedule is what is to be expected for all of the ensuing events this spring.

The cluster is great, but it gets better.

By mid-April, Jupiter will make an appearance. Technically, it’s visible starting as early as April 17, but the viewing experience will get better as the latter days of the month approach. 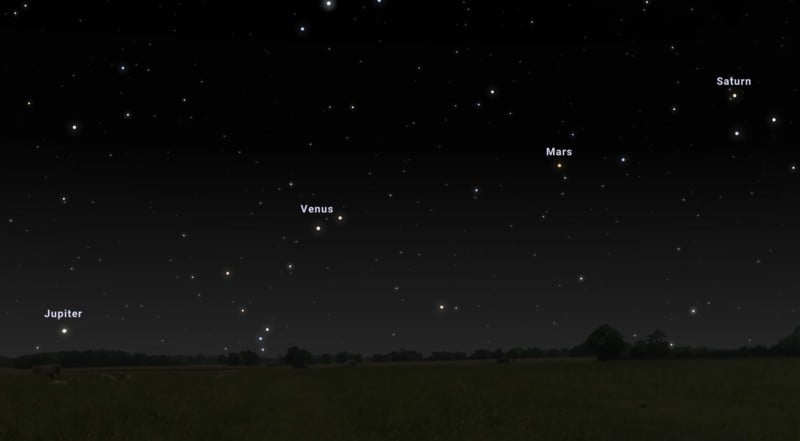 The Moon Joins the Party

By April 23, the Moon makes an appearance. As mentioned, it might be difficult to see Neptune amongst the stars and the other planets in this alignment, but it will also be there just to the right of Jupiter for those who wish to catch a glimpse. The alignment below will take place from the perspective of those in Los Angeles at 5:25 AM. By April 26, the moon will move down and cluster closer to Venus, Mars, and Jupiter and forms a more distinct crescent. By the 29th, it will disappear below the horizon line and leave the four planets by themselves again.

Continued Visibility Through May

While the moon will not be present for much of it, the four planets will continue to be aligned in the night sky for several more weeks. However, the arrangement will shift. Instead of starting from left to right with Jupiter, Venus, Mars, and Saturn, Jupiter will overtake Venus and appear to its right. 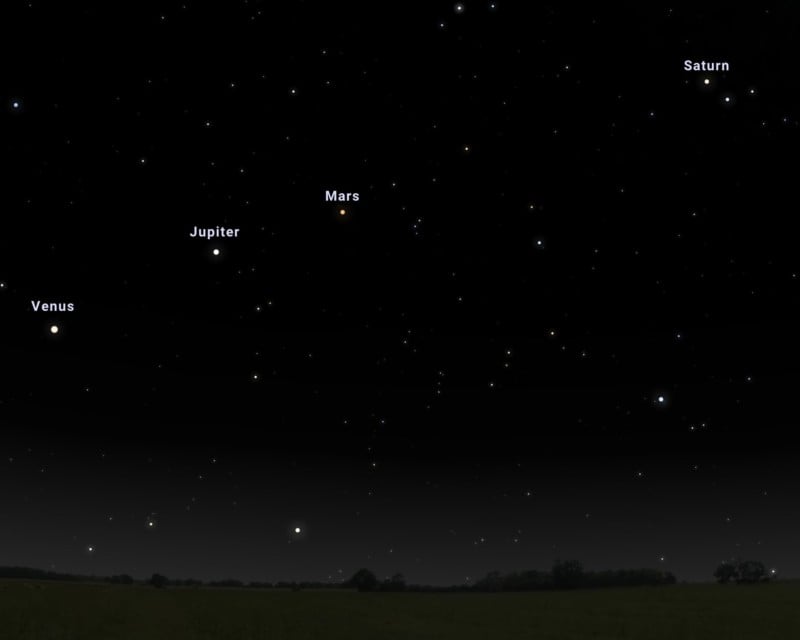 By May 21, the moon will return and over the next few days will slowly slide below the four planets. It should be noted that the asteroid Vesta — one of the largest objects in the asteroid belt — will also be present through many of these appearances from April through May, above and to the right of Saturn in April before falling just to the left of it by May.

Five Planets and the Moon Align in June

By June 24, five planets and the moon will align from Earth’s perspective. Mercury, Venus, Mars, Jupiter, and Saturn will all be visible together with the crescent moon. This is a rare alignment, but since the group will take up a large, wide portion of the sky, photographing them together may be challenging, but the view will be spectacular.

Technically Uranus will also be in the alignment, but seeing it with the naked eye will prove difficult.

Other Astronomical Events in 2022

The cluster and alignment of the planets is the longest-lasting of the astronomical events of 2022, but there are others that follow. On August 12 and 13, the Perseid meteor shower will take place. Jupiter becomes even more visible in the sky (called its Opposition) on September 26. On November 28, a total lunar eclipse will take place before sunrise, but not everyone in North America will be able to see it. On December 8, Mars will be in opposition. Finally, the Geminid meteor shower can be enjoyed on December 13 and 14.