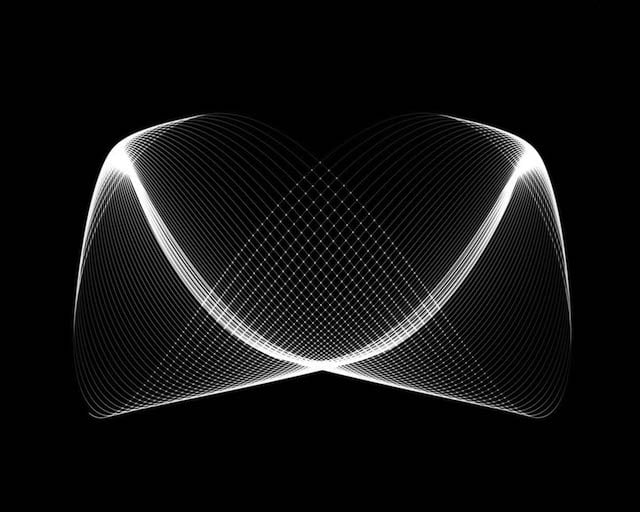 Created in the pitch blackness of his barn at night, Wainwright shoots these beautiful light paintings with the help of a massive Blackburn pendulum he built himself and a large format camera packing 4×5 sheet film.

Wainwright can actually trace the birth of this project all the way back to 1967 when, as a 17-year-old high schooler, he fell in love with the photography of Bernice Abbott that filled the pages of his Physics textbook.

Abbott’s photos and the Physics class inspired him, and he began experimenting with putting a light source on the end of a pendulum, laying down underneath it, and taking a long exposure. Later, that idea evolved when he learned about something that was then called a double pendulum (no a Blackburn pendulum). 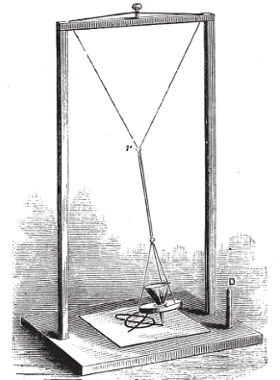 Unlike a normal pendulum — which is just a weight suspended at the end of a string — a Blackburn pendulum looks like the image you see above. With a blackburn pendulum, there are now two lengths involved, and by changing the ratio of those lengths Wainwright can change the patterns that the tip of the weight traces in the air while he’s capturing an exposure.

The image below, for example, is done using a ratio of 2:1, meaning the length from the top of the pendulum to the point where the two top strings (or in Wainwright’s case wooden beams) meet is twice as long as the length from that point to the weight:

While this one is taken when the ratio was 3:2: 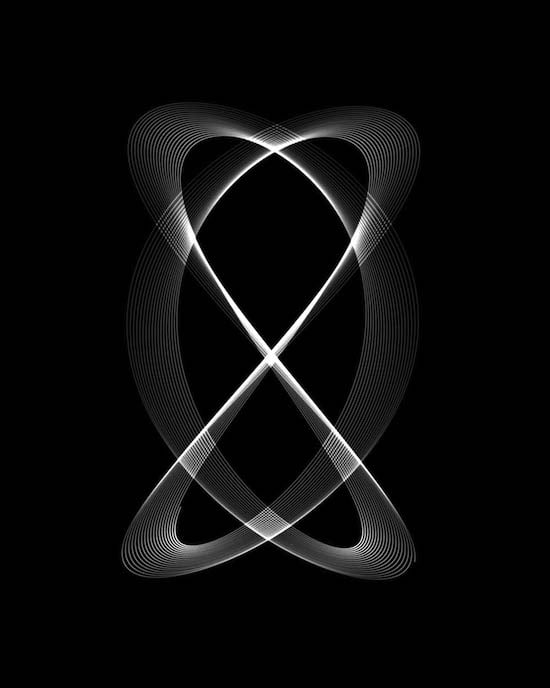 The pendulum that Wainwright uses is a huge contraption that he built himself, and the actual process he uses to take these incredibly smooth, symmetrical photographs is nothing short of astounding. It is, however, also incredibly complicated, and so we’ll let him explain it in this in-depth behind the scenes video:

All of that work — all the electromagnets and adjustments and calculations — lead to these images, captured on 4×5 sheet film from the floor of his barn: 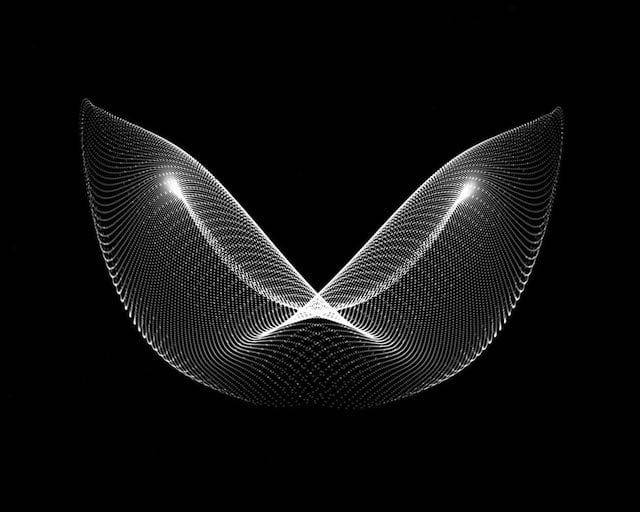 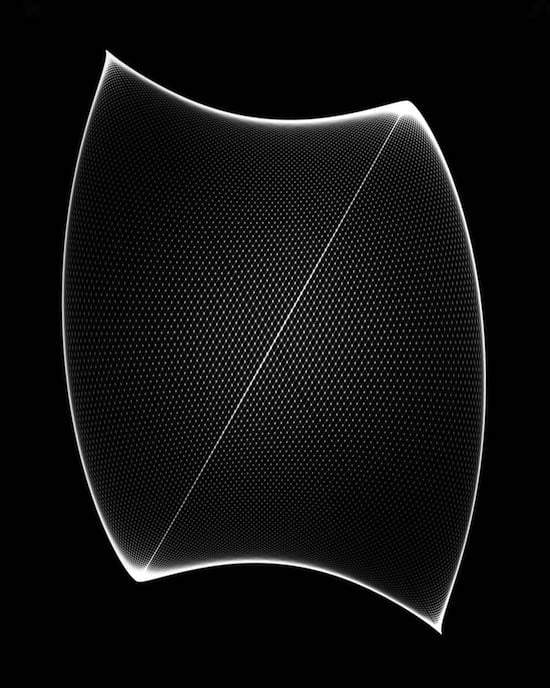 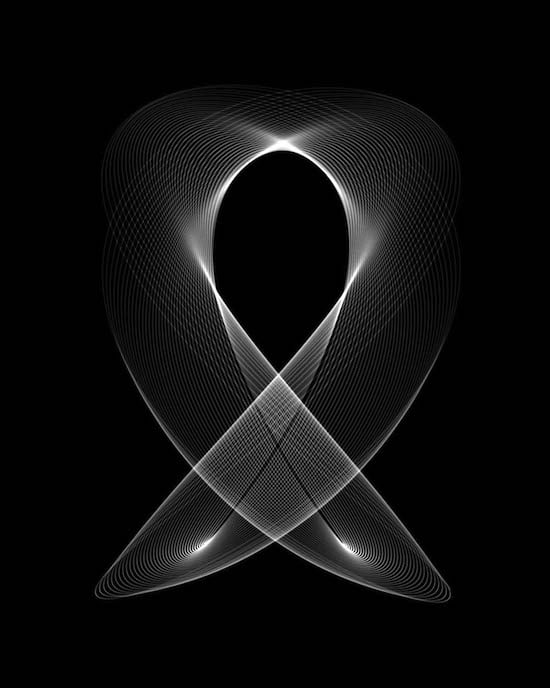 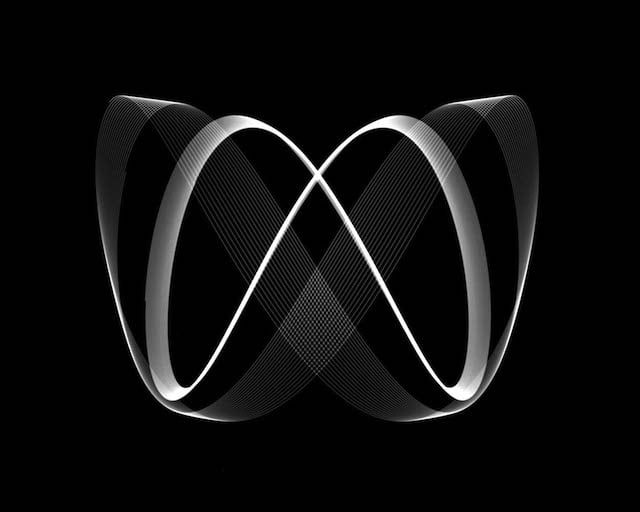 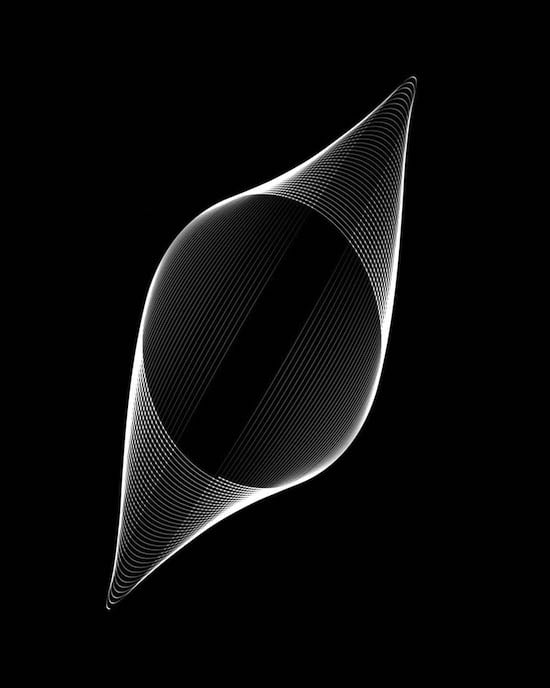 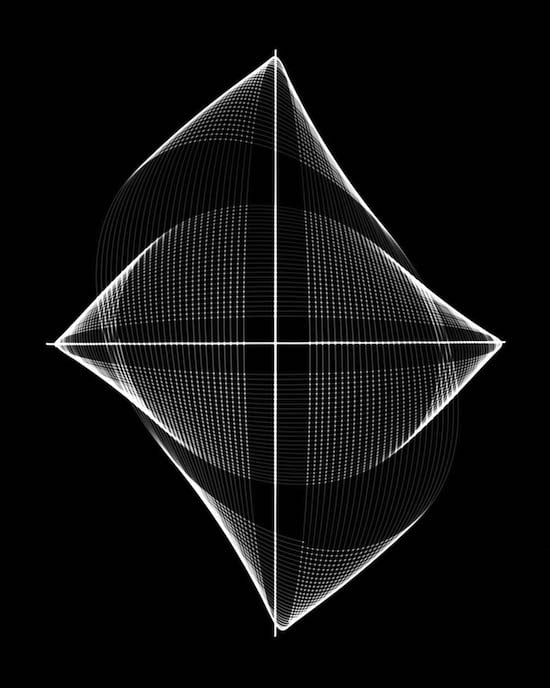 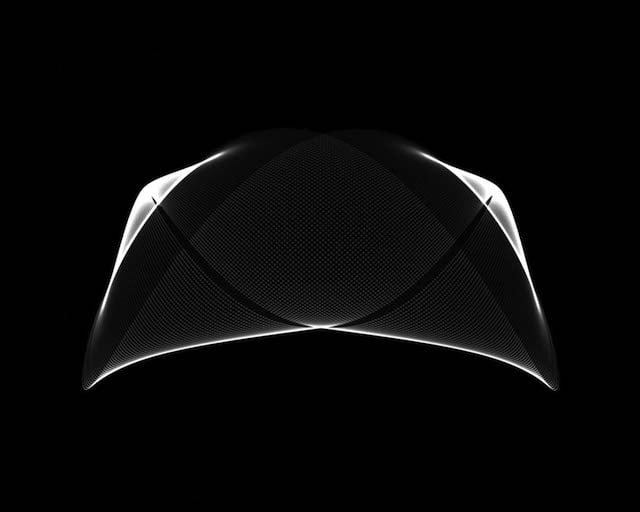 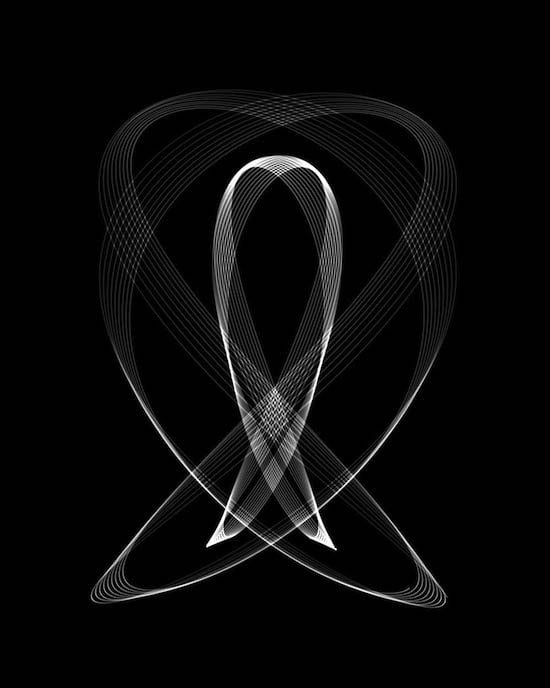 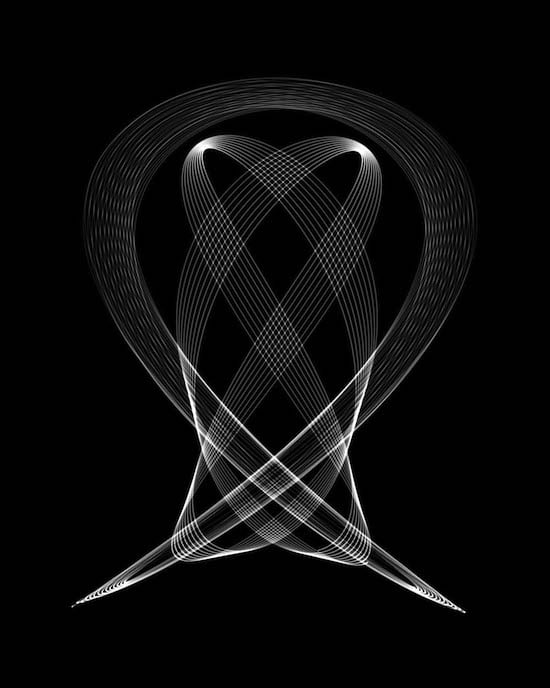 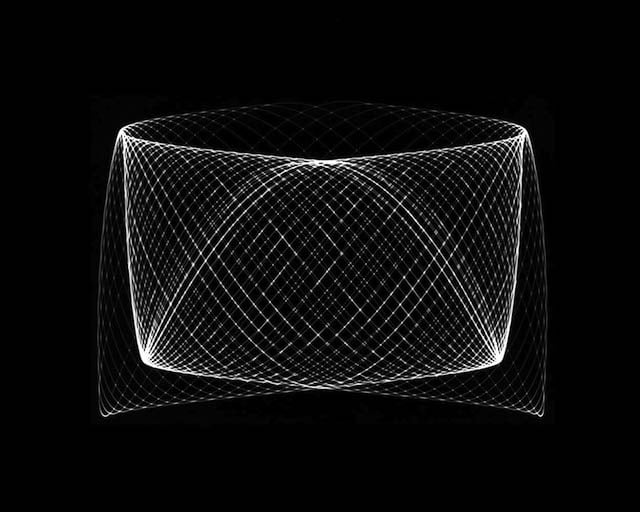 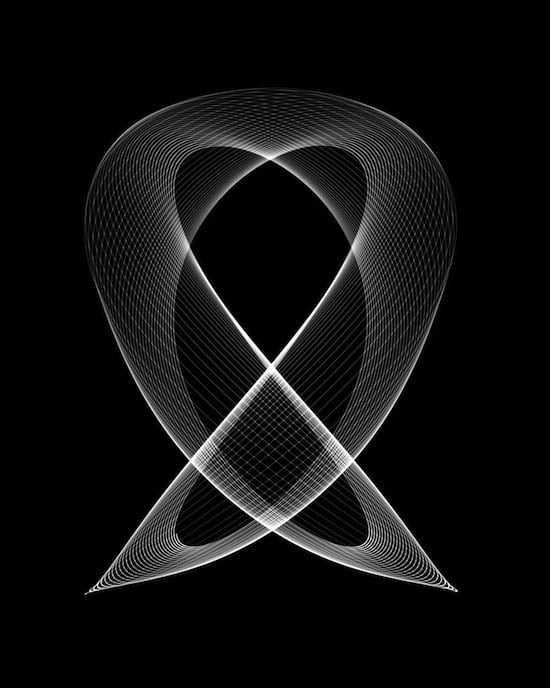 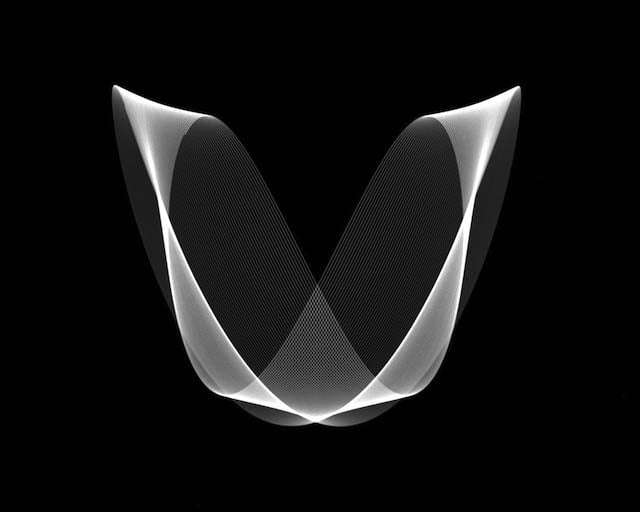 To see more of these light paintings or browse through the rest of his portfolio, be sure to pay his website a visit by clicking here. If you want to learn more, however, go ahead and keep reading.

We actually got a chance to speak with Mr. Wainwright before publishing this article, and he was kind enough to answer a few followup questions that we had about the images, the inspiration behind them and how they’re captured. We’ve included those questions and answers below for those of you who want to dive even deeper down the rabbit hole. Enjoy!

PetaPixel: You talk about your inspiration to create these images as your Physics text-book from High School, and showed a couple of examples of your first attempts from the gymnasium. Did you continue to take pictures like this on and off since that time, or was there a long hiatus between your first attempts and when you decided to take this work to another level with the double pendulum.

Paul Wainwright: No, my life took me in many other directions, and it was about 40 years before I had a space (my barn) and the time to really construct a pendulum large enough to make really fine images.

PP: Also, what camera were you using in the gymnasium to take your first pictures?

PW: My camera in 1967 was a Honeywell Pentax H1-A single lens reflex with 35mm Tri-X film.

PP: What challenges did you encounter once you started building your current pendulum? It seems like you have the image making process down to a very precise science now, but there must have been some trial and error on the way.

PW: “Wobble” was the most frustrating problem. When I start the pendulum, I want it to immediately start tracing a smooth line. If the electromagnet is not placed precisely at the center of mass of the steel weight, the weight will wobble for a few seconds, and the line will be wavy. Maybe that might be in someone else’s artistic interpretation, but not mine!

PP: Do you shoot any digital at all? Is there a specific reason why you continue to shoot these on sheet film? Obviously the prints must be magnificent at such a large format, but I wonder if you’ve toyed with digital in your work.

PW: I’m greatly increasing the contrast of the image in my development of the film and making of the prints. While I’m sure there are ways to get a digital camera to do this, I find that 8-bit capture does not give me enough range to do this amount of contrast increase. So, no, for the artistic work I use 4 x 5 sheet film. However, I do run a digital camera, off to the side of the 4 x 5, so I can get an idea of what the pattern looks like before I develop the negative. In this way I can make minor changes and try the exposure again if I want to.

PP: And, finally, what are your plans for this art form going forward? You mention in the video that you feel you’ve only begun to scratch the surface of what is possible with these images, any ‘preview of coming attractions’?

PW: I have recently become aware of a musical analogy to my work. If the tones produced by two musical instruments could be recorded graphically, they would make patterns very similar to mine! So my work this winter (when it gets dark at a reasonable time) will be to explore pendulum set-ups that mimic the various intervals that two instruments might play, such as a minor third or major sixth, that sort of thing. If I lost you with that explanation, stay tuned to my web site as the season progresses!

Image credits: Photographs by Paul Wainwright and used with permission