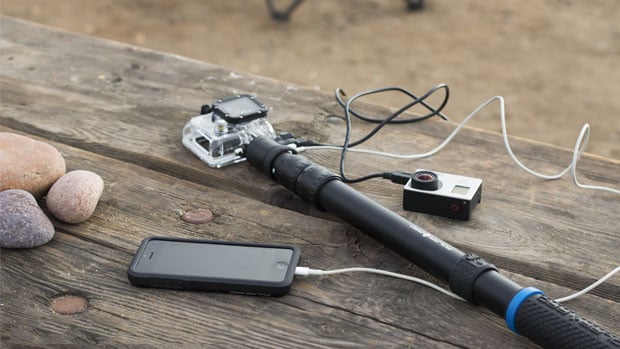 There are times when two completely separate products make even more sense when brought together as one. Such is the case for Polar Pro’s PowerPole, a GoPro extension pole with a built-in equivalent of 5 GoPro batteries. Currently in its crowdfunding stage, the Kickstarter has already amassed its funding goal meaning this beast is about to become a reality. 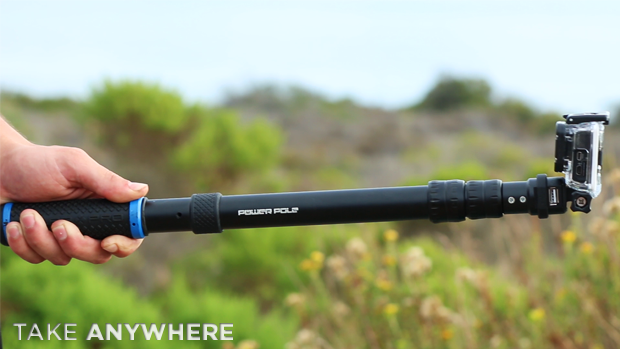 GoPros are amazing little cameras. But with a form factor as small as the various iterations of GoPro Hero cameras, it’s inevitable battery life is going to be a weak spot. It’s this weak spot that motivated GoPro accessory manufacturer Polar Pro to conceptualize and create the PowerPole. The PowerPole is made out of an aluminum frame, capable of extending between 17” and 30”, a 5400mAh rechargeable battery, two full-sized USB ports, an LED battery life indicator and a splash-proof port to protect the connections. The impressive battery that this pole packs inside means you’ll be getting up to 8 extra hours of recording time with your GoPro; five times that of what the GoPro’s battery alone can put out.

Since the PowerPole has already met its funding, Polar Pro has added a number of stretch goals, including a mount that will allow smartphones to be used in place of the GoPro.

To secure yourself one of these contraptions, you can head on over to the Kickstarter page now. While you may have missed the ‘early bird’ specials, you can pick one up for a pledge of $120.

It’ll be interesting to see whether something like this will be available for larger still cameras in the future — having a monopod or a tripod double as an external battery seems like a pretty useful idea.

HTC is Reportedly Building an Action Camera to Challenge GoPro