Daisy Gilardini is a passionate wildlife photographer whose life-long infatuation with photographing bears has lead her to capturing what is arguably the most elusive of them all: the spirit bear. 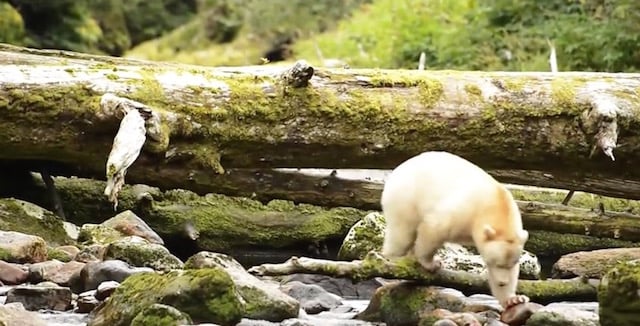 Technically a sub-species, the ‘spirit bear’ is a North American Black Bear that is actually white in color due to a genetic mutation. No more than a thousand of these animals exist, and most of the ones that do roam this Earth in British Columbia, Canada.

In the above video, Gilardini details the adventures she’s had trying to capture this animal on camera, explaining her fascination with bears, the journeys it took to finally capture the photographs she wanted and some intimate moments with a bear named ‘Mushroom’ who let her get close enough to hear his breathing while she was snapping photographs.

“I always had that attachment for wildlife,” explains Gilardini in the video. “I’ve photographed polar bears, I almost circumnavigated the Arctic, the Russian arctic, the Canadian arctic, and I always heard stories about this spirit bear.” As of late, this rare animal is at risk of being endangered thanks to the development of land around their habitat. Gilardini specifically mentions the production of ‘huge pipeline’ that will inevitably put the environment around where the spirit bear lives at risk.

That’s why it’s always been of the utmost importance to her that she photograph the animals in a respectful manner:

For me ethics comes first. I will never put in danger or disturb an animal just to get a picture. So, as soon as I see distress in the animal I just stop, give him space, until he is the one to approach me.

At five and a half minutes, the video is a wonderful Sunday watch. Press play and listen to Gilardini share her passion and story, all the while marveling at some of the wonderful images she’s captured along the way.

Battle of the Client Galleries: Comparing 11 of The Best Tools for Proofing and Presentation