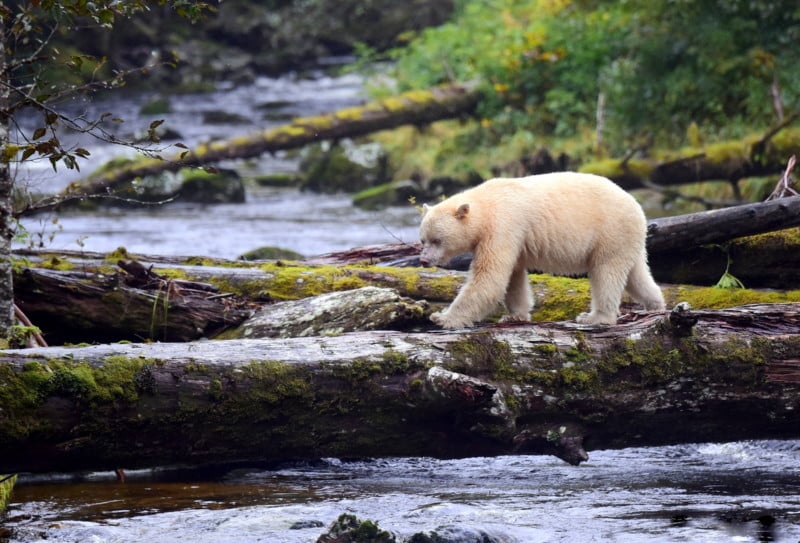 An extremely rare type of bear only found in a small area of British Columbia, Canada, was captured by lucky photographer Jenny Stevens.

The kermode bear, known as the spirit bear, has a recessive gene, much like blue eyes in humans, that produces on a pure white coat when the animals usually have black fur.

There are estimated to be only 400 of the animals in the entire world and Stevens was fortunate enough to travel deep into the Great Bear Rainforest in 2017 to capture a mom and cub. 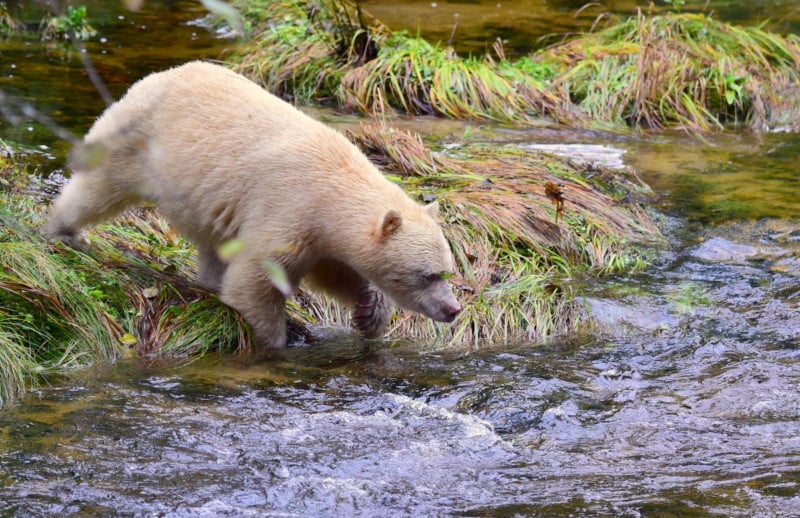 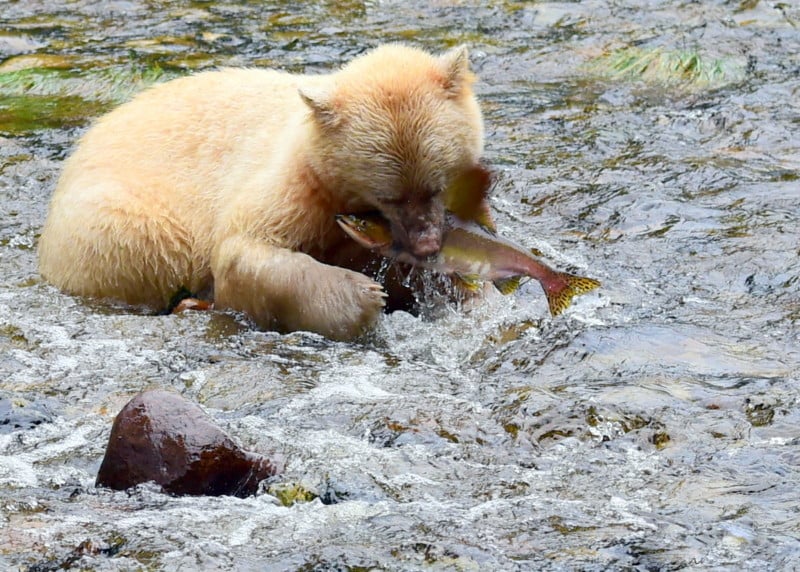 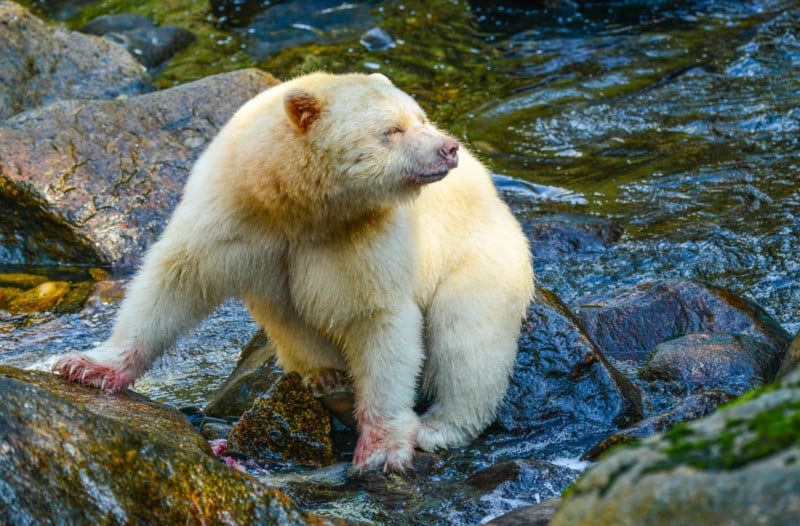 “A photographer friend of mine had photo workshops and he suggested I join him on his ‘Great Bear Rainforest’ workshop,” explains 77-year-old Stevens.

“He organized the details by chartering a 71-foot sailboat with enough room for eight photographers. It was a seven-day trip motoring (never used the sails) through the Rainforest.

“One section — Khutze Inlet and Mussel Inlet had Grizzly Bears.” 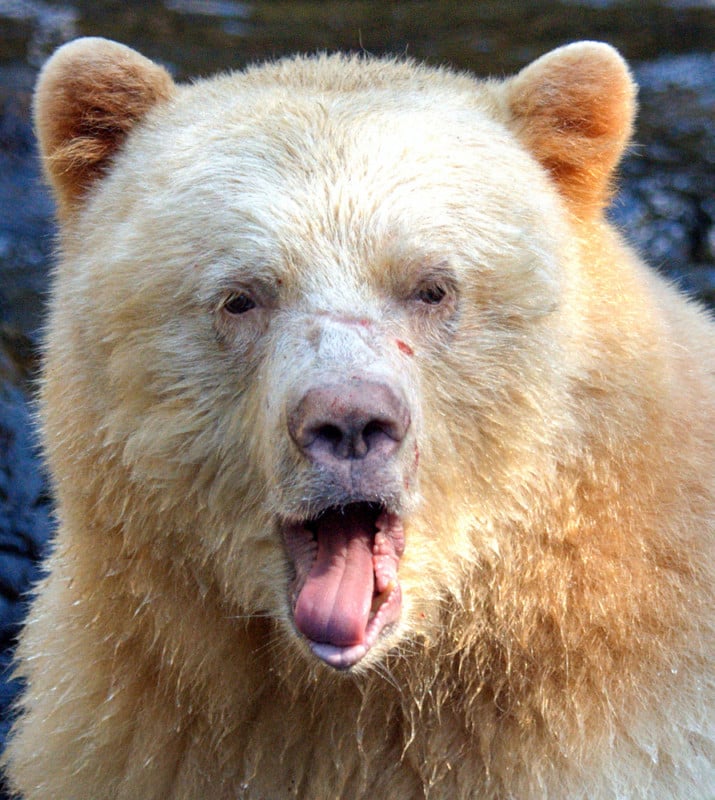 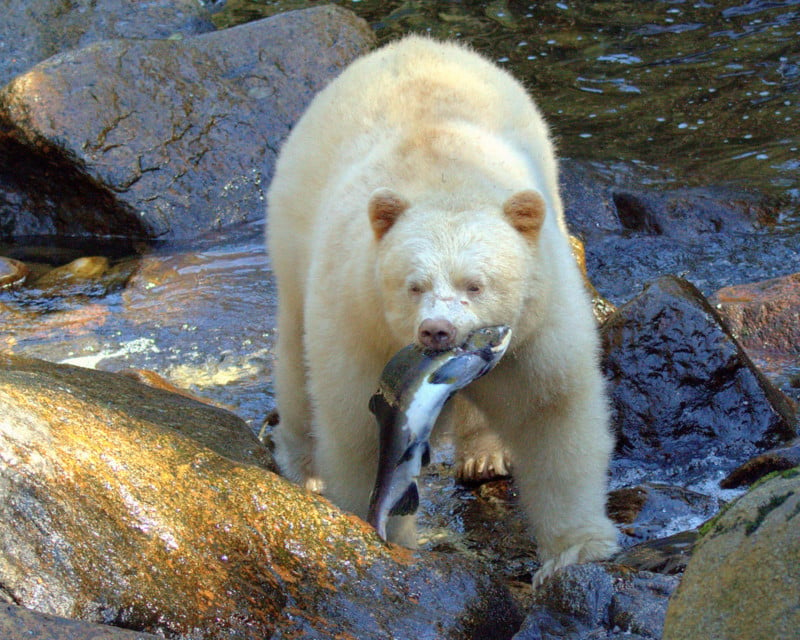 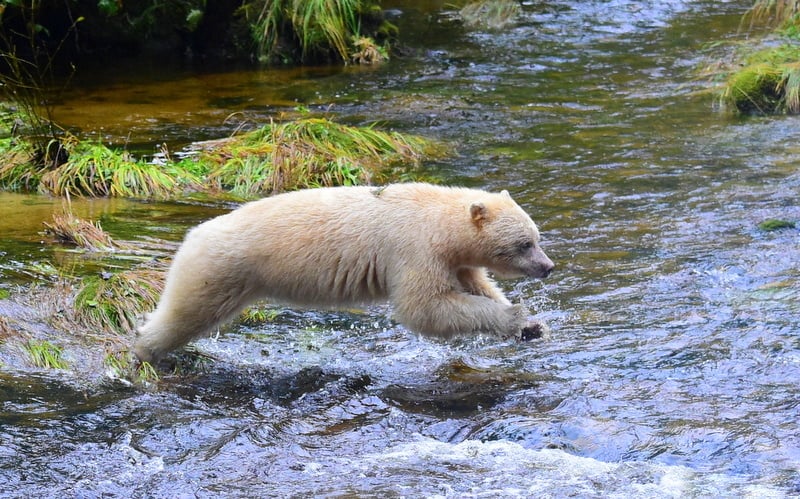 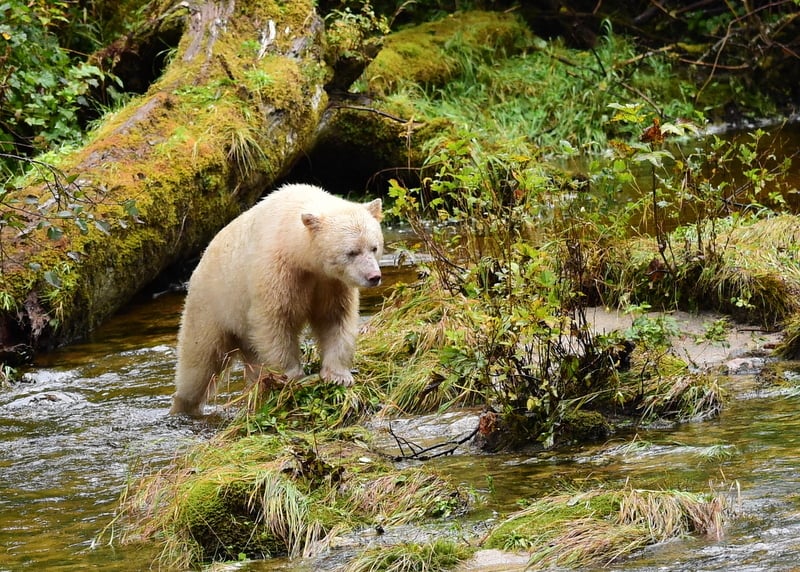 The intrepid photography crew anchored off Gribble Island, some 400 miles from Vancouver.

“It was a rough go to climb the banks of Riordan Creek to get to a walking path. It was about a mile walk to our lookout. We set up our equipment and waited for Mr. Spirit Bear to show up walking the River in order to capture a Pink Salmon spawning.”

“There was one trip where there were so many pinks that the bear just grabbed the females for the roe and threw any males back. The odd black, black bear showed up as well.

“It has been proven that the spirit bear has more luck catching salmon than the Black Bear as he is not seen as easily as the black, black bear.” 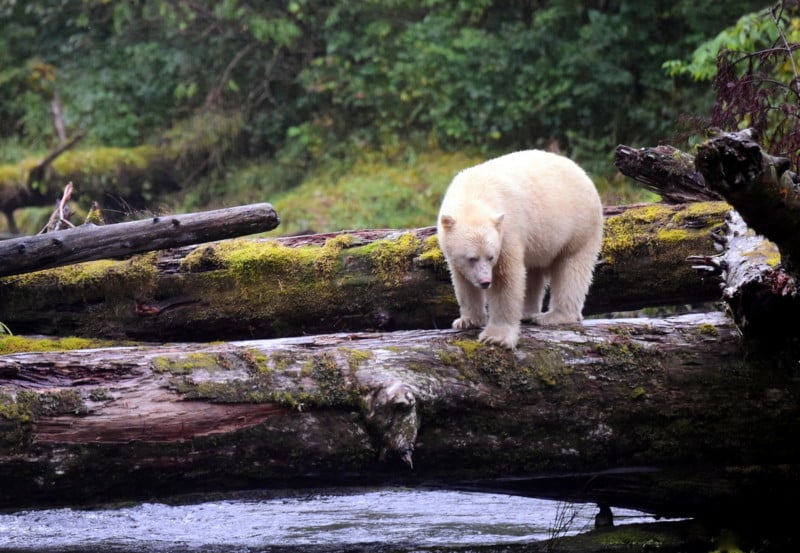 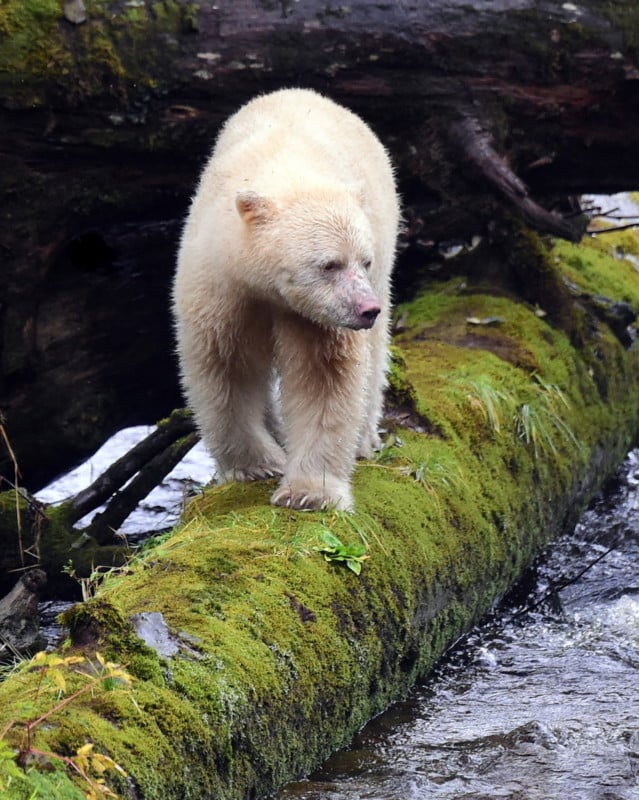 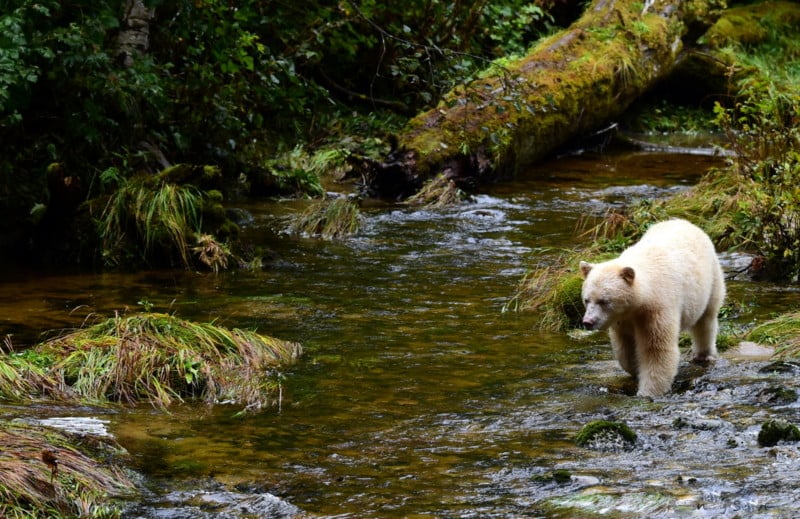 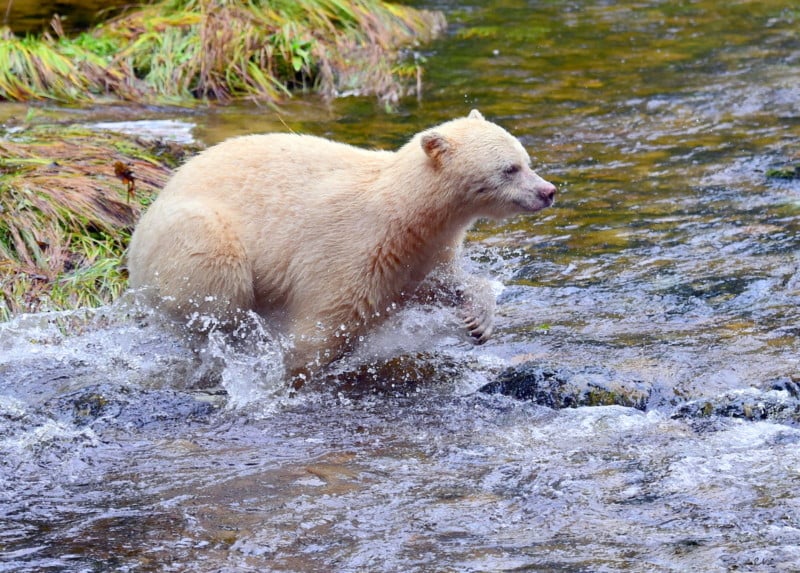 Stevens used all Nikon gear with a Nikon 200-400mm lens attached, plus a monopod for support.

Stevens says that most people who see the bears believe that they are albino, but this is not the case as they still have pigmented skin and eyes. Their white fur is down to a gene that causes melanin not to be produced.

“There is only one in captivity,” explains Stevens.

“He was captured as a cub, released three times but refused to stay away from humans. He is in a British Columbia Wildlife Park in Kamloops, B.C.” 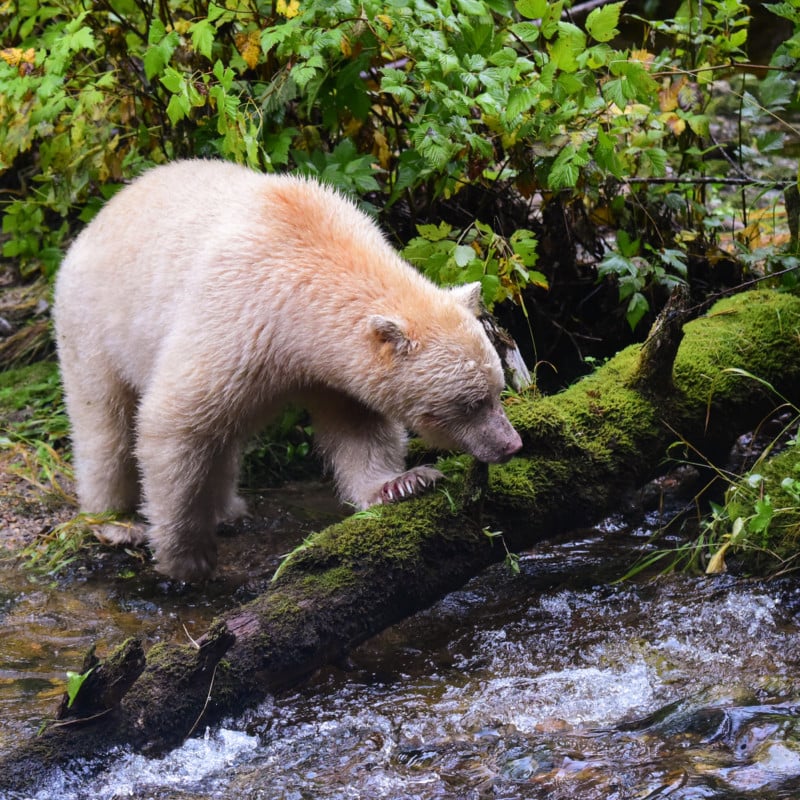 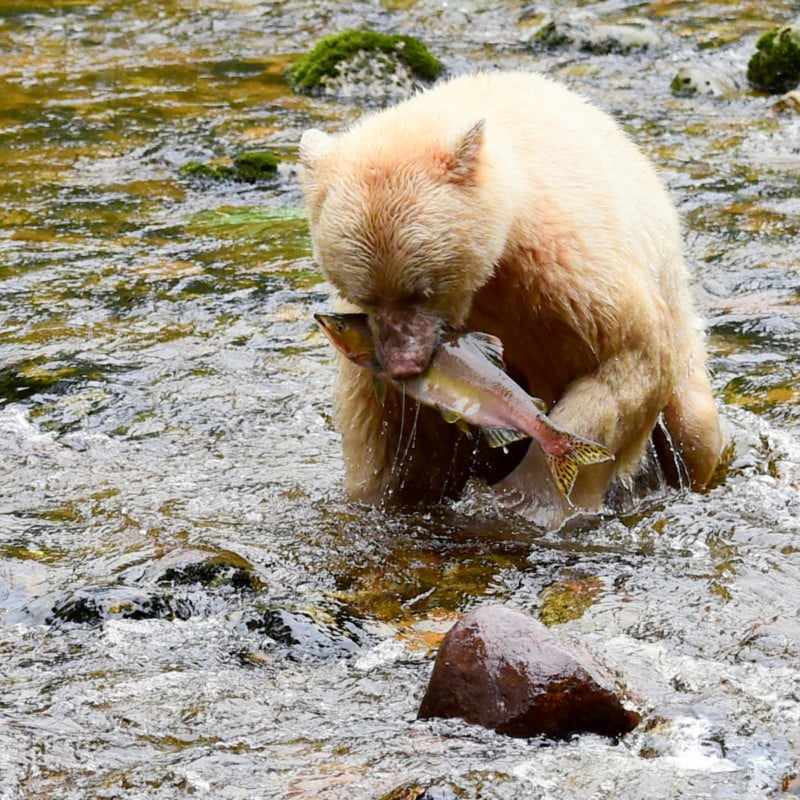 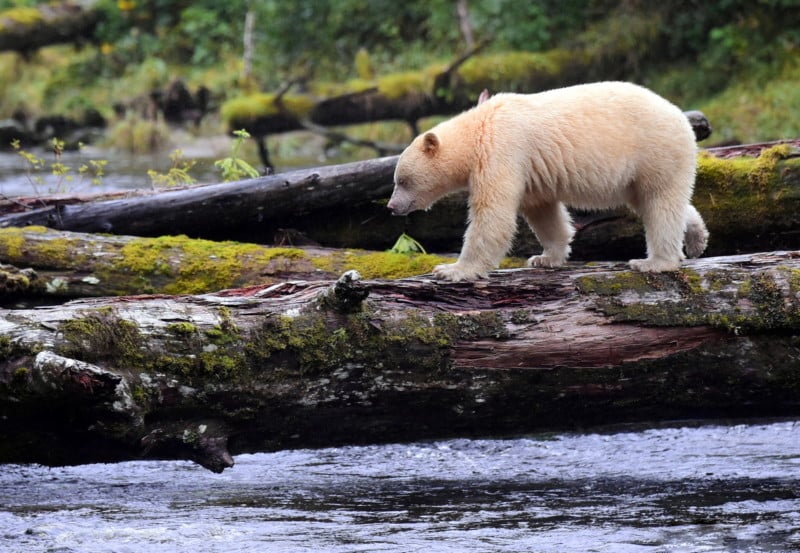 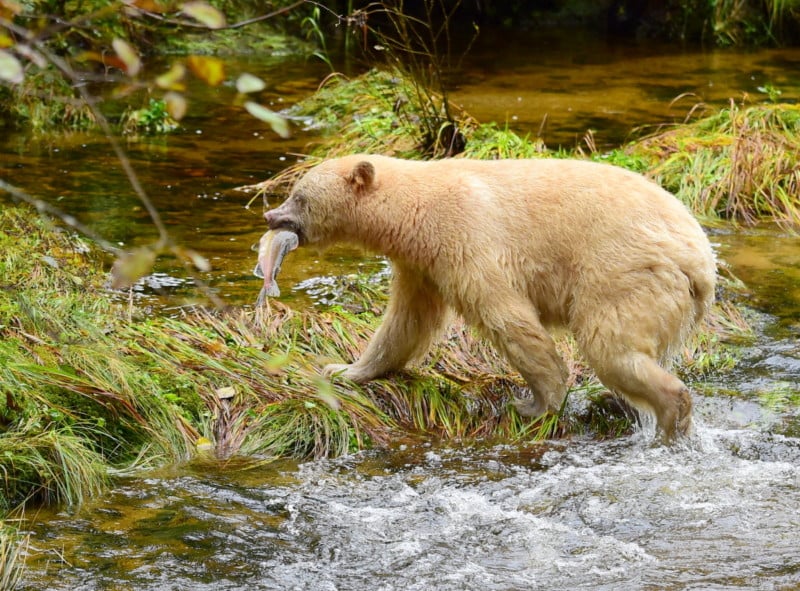 Spirit bears hold special meaning in the oral tradition of indigenous peoples from the western region of Canada.

More of Stevens’s work can be found on her website.