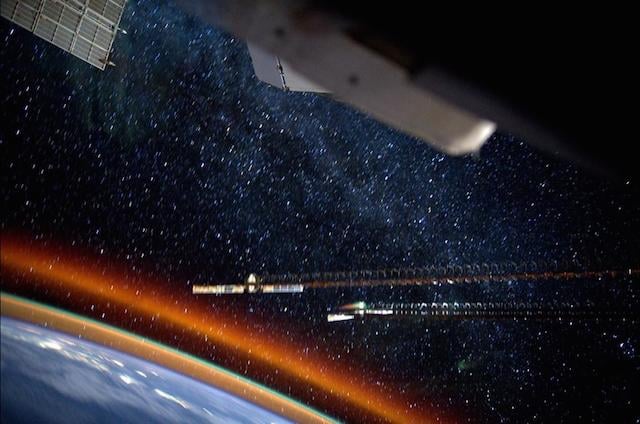 It’s one thing to visualize different layers of gasses in the Earth’s atmosphere and see drawings and models in a book or online… it’s another thing entirely to capture it on camera. But of course, that’s one of the perks of being an astronaut on the International Space Station, you get to do a whole lot of things that are “another thing entirely.”

The photograph above was taken by astronaut Reid Wiseman and uploaded to his Twitter feed early this morning. It’s a 3-second exposure, and we know this because he captioned the photo “3 second shutter exposure at night shows how crazy our #atmosphere really is.”

3 second shutter exposure at night shows how crazy our #atmosphere really is. pic.twitter.com/iujEqpjQqT

The orange and green arcs are layers of glowing gas are called airglow. Each layer glows at a specific wavelength or band of wavelengths. The broad orange layer at the top is due to atomic oxygen from ~250 km altitude. The narrow green layer is also atomic oxygen and that originates from near 96 km altitude. Just below that is another orange layer due to atomic sodium from meteors burning up in the upper atmosphere at ~90 km altitude. Maybe a contribution in that layer by hydroxyl from 87km also.

‘Crazy’ indeed. To see a higher resolution version of the photo or to keep up with Wiseman as he continues on uploading amazing images from space, be sure to visit his Twitter and give him a follow.

And as a bonus, here’s the next photo he Tweeted from space not long after the photograph at the top:

#Bangkok is the bright city. The green lights outside the city? No idea… pic.twitter.com/TDzyin3hK7

NASA is Asking You to Help Them Sort Through Over 1.8 Million Photos from Its Archives