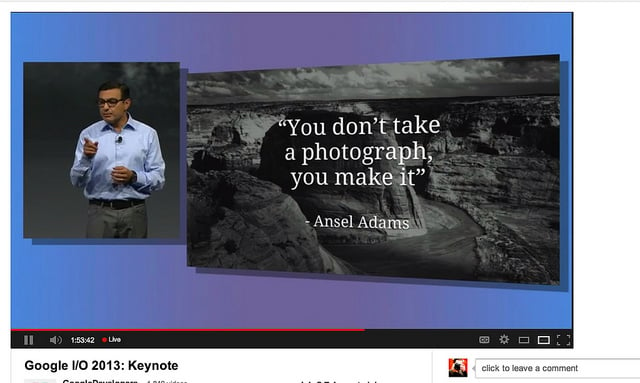 Google used to have a standalone photo sharing service. It was called Picasa. I never really liked it. It wasn’t a very social site. I thought Flickr was a lot better.

Today’s news is that Google is looking to spin off Google Photos from Google+. Maybe it’s true, maybe it’s not. You never know. The timing of Friday afternoon stories and leaks always makes you wonder. Usually when companies want to push something they release it more like Tuesday mornings or make a big deal about it at I/O or something.

Whatever the case, photos has been one of the highlight use cases for G+. Many photographers have flocked to the site and I think it’s done a pretty good job with photos overall.

If Google is going to launch a standalone photo service though, they should really go all out. I worry that they’ll launch something less than fully baked — it will generate a bit of initial excitement and then lack stickiness.

With that in mind, here are 10 suggestions that I’d give Google in launching a standalone photo sharing service.

Flickr has raised the bar by giving everyone a full terabyte of high res photos. Flickr made one big mistake with this offering though. *Private* high res photos are of very little value to a photo social network. Public photos are *very* valuable to a photo social network. Public photos are worth more to a social network than the cost to store the photos. Flickr just gave everyone a terabyte without distinguishing the visibility of the photos. Google should offer at the launch either unlimited or 2TB of high res public photo storage with every account. This will get great press and attention.

Partner with photographers to sell their photos. Flickr just leaked something like this earlier this week. Partnering with photographers to sell photos is not just about stock photos as revenue (although the stock photography market is in fact a multi-billion dollar market ripe for disruption). This is about attracting the sorts of high quality photographers to your network because they will be paid for participating through photo sales. By providing photographers an avenue to sell their stuff and make real money, you endear them to your network. Tie the visibility of their work, in part, to their level of activity on the network — not directly, but just float that out there so that photographers feel like the more active they are on the network, the more $$$ they may make.

Create a super light weight mobile client like Instagram. Make it so simple. Tap/tap to +1, like, fave, whatever. Really dumb it down. Just something to follow your friends’ stuff and favorite it without all the other clutter of G+/Facebook getting in the way.

Build an intelligent way to organize albums by keywords. Manual album management sucks big time. Let me build albums by keywords (this will also encourage more keywording which is valuable organizational metadata for Google to have). Study what Jeremy Brooks has done with SuprSetr and build something like that but even more intuitive and easy to understand and use.

Build intelligent groups for photographers to hang out in on the photo network. Unfortunately Google got one thing very wrong with communities in G+, which is why communities never took off. They refused to bump threads based on new comments. This ensures that all threads die quickly. It’s the longevity of conversations that fuel community interaction. Refusing to bump threads based on comments makes large groups completely chaotic and unusable. Why invest in a conversation that will be completely buried and dead in 24 hours and that I’ll never be able to find again? Let me mark conversations as favorites and feed all my favorite conversations to me in a feed ordered by recent comments/activity.

Go mosaic big time. On the web, give users a huge wall of photos with infinite scroll to just scroll through and +1. Code the site so that if you are hovering over any photo and press the “f” key it +1s it. Lubricate social activity on the web. Social activity begets social activity. The more you make it easy for people to like/fave/+1 stuff and the faster you make it, the more you get. The more people get, the better they feel about the network.

Spend some serious money the first year on community management/evangelism. Hire a whole bunch of photo community managers and partner with influencers all over the world. Require community managers to host at least 2 photowalks a month in their geographic region. Require them to spend 10 hours a week inside of social groups interacting with photographers on the new site. Bombard your users with interaction from Google Community Managers. Make sure Googlers are using the site to share their photos, especially visible senior management. Keep track of how many +1s, comments and other interactions Googlers have with photos on the network and make sure Googlers know that this matters.

Open some fine art physical galleries. These can be used to host meetups and gallery shows for G+ photographers. You can also sell physical prints and DVDs of photo series from these galleries. Social photographers love doing shows with their work. Digital displays make doing temporal shows easier than ever. The ego boost a photographer gets when they are showing their work in a group show is substantial. Capitalize on this to draw the finest photographers in the world to your network.

The Nik Software stuff from Google is really good. Snapseed is the best mobile photo editing software out there. Analog Efex Pro 2 really is some of the best photo processing software I’ve used in years. Google could create something as good as Lightroom, maybe even better. Build this into the site for processing but also give people the ability to download the software to their computers for when they don’t want to work in the cloud and want to work locally. Sell this software for $99 with a six week free trial. Users who upload at least 5 photos on different days to the new photo network for six weeks should be given a promotion code to get the software for free.

That’s all for now.

Back to the Basics: ISO and Noise Explained