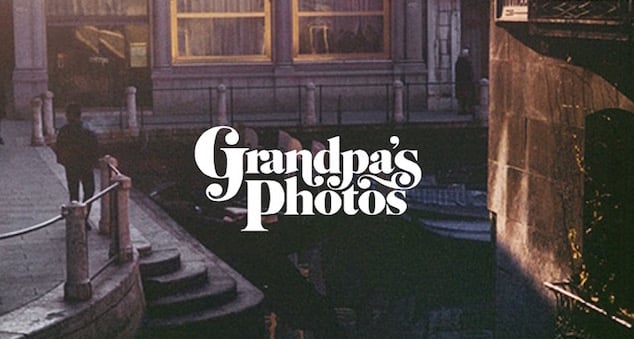 It’s a sad day when your Grandfather needs to go into a ‘nursing home.’ For years my Grandpa, Stephen Clarke, had always been the strongest, smartest, most capable guy in the room. Now, he had been reduced to needing 24-hour care in a place that smells like a hospital.

In an effort to help him, my family and I cleaned out his now empty house. As I was sorting through things and cleaning I found a box of old 35mm slides. Little did I know just how much these slides would change the next half-decade of my life, eventually leading me to create my latest project, Grandpa’s Photos.

You see, these slides weren’t just good; they were amazing. As I held them up to the light, I started to make out the worldwide adventures my Grandpa had been on. Adventures he’d never mentioned.

I got some of the slides scanned and took them down to show him, in the hope of him telling a number of ‘Grandpa quality’ stories. I thought the slides and the evident adventures would give him more cheerful things to talk about than catheter bags and test results. I hoped to treat him like the daring, strong man he once was, rather than the frail, timid man who was now confined to a bed — he was never fond of sympathy.

When I asked him about the places in the photos I had found and scanned, he said that he appreciated that I loved the photos, but he was unable to remember where they were taken. From the context clues within the images, it looked as though many were captured throughout Italy, Spain, Hong Kong, and numerous other places throughout the world. Surely there must be some great stories behind them, right?

After asking my Grandpa, I came to the thought ‘Someone online must know where that European looking fountain is’ or ‘Where that amusement park might be’. It was then I decided I would put all the photos up on the internet and ask other people if they knew where the photos were taken. Maybe, just maybe, someone would know where they were shot, thus helping Grandpa’s memories return.

Five years later, after my own adventures, I still hadn’t finished the website. I’d moved to London, then New York, chasing an exciting career in advertising. Unfortunately this career path left me never getting much sleep, let alone spare time to work on a website for Grandpa’s Photos.

But I couldn’t stop talking about the photos. They were incredible.

I showed them to one of my Creative Directors, who decided to put them in an exhibition…in New York! As an Aussie, anything in New York is incredible, let alone getting in exhibition in the Big Apple.

On my next trip home I had the opportunity to tell Grandpa his photos were so good, his work was being displayed in an exhibition in New York.

He was elated! Everyone within a 5km radius – Grandpa’s scooter range – of his nursing home knew all about the photos. For the first time in a long time, he didn’t talk about test results; or infections; or old people ailments for days. It was working – the photos were giving Grandpa an escape.

He still thought it was just me being nice, just saying the photos were good. He never truly believed they were more than just snapshots of his work trips.

Grandpa worked as a ‘Buyer’ for Prouds, an Australian jewelry company. Apparently, on his trips to Europe and Asia he would carry around his camera, snapping away the world around him. Upon arriving home, he gave the family a slide show of his travels, the slides then going into a box, never to be seen again.

I had hoped to show him how much everyone loved his photos. And a website was the perfect way to do it. Through all of the feedback, comments and praise, I wanted to truly show him how incredible of a photographer he really was. After all, grandpa was the only person left to convince.

Then, it happened. Grandpa passed.

For now, I’ve quit working and decided to get the website done. The goal? To prove Grandpa was a great photographer, even if he’s not here to see it.

I’m not a web developer, but I managed to get Grandpa’s Photos to work, showing the photos and the story as simply as I could. I sent it out to my Facebook friends, hassled everyone to take a look and send it to their friends.

For those of you who have already read and browsed through the site, I have but one request. That is, to let me know if you recognize any of the locations in the photographs. Grandpa may not be here to tell the tales of the adventures that led to them, but getting a better understanding of the legacy he left in images is still as important as it was while he was still here.

The site has received over 25,000 hits in the first 4 days; more than I ever thought it’d get in its entire existence.  A few short weeks later it’s up to over 65,000 hits and counting. It’s not ‘cutesy kitten video’ numbers, but it’s pretty good for a few old photos.

These stats are a testament to his skills as a photographer. Were he still here, Grandpa would have jumped on his scooter and screamed around the home, swinging a catheter bag around his head. He would have been pretty pleased.

The emails I get hourly are so incredibly kind, inspiring and helpful. There are 50 of Grandpa’s travel photos on the site. Some are blurry or seem to have no clues in them as to the location, but people have still managed to locate the scenes.

People from all over the world are finding the tiniest of clues in the photos and sending me the Google maps link. With each passing day, my mind is being blown by the exhaustive efforts from the online community. Some individuals have gone so far as to send me photos of the locations as they currently are.

Of the 50 photos shared on Grandpa’s Photos, 90% have been found. I had hoped to find some of them, but this amount is purely astonishing.

I don’t know how to thank people enough. My constant ‘thank you’ messages on the Grandpa’s Photos Facebook Page are getting a bit monotonous. I’m also trying to respond to every email, but it’s impossible to keep up. Just know I’m doing my best.

With almost all of the locations discovered, I’ve decided to go on an adventure of my own. The long way home, really. Using the locations that have been sent to me via the site I’m attempting to find all the places Grandpa took these great photos, take the same shots today and hopefully create some Grandpa–worthy stories.

Thanks to the crowdsourced efforts of finding the locations on Grandpa’s Photos I’ll be visiting Zurich, Biel, Bern, Interlaken, Geneva in Switzerland; Venice, Siena, Florence, Rome in Italy; Madrid and Barcelona in Spain; Lisbon in Portugal; and Hong Kong in China. I don’t have a lot of cash or time but it should be an amazing trip. I’m working on an update to the site, with all the found photos and new pictures people have sent.

I’m not exactly sure why I’ve decided to go through with all of this. Maybe it’s a tribute to Grandpa. Maybe it’s just an excuse for a fun trip. Or maybe, just maybe, it’s a way for me to keep him around for a little bit longer.

About the author: Dave Tompkins is the grandson of Stephen “The Photographer” Clarke, the photographer whose work is throughout this post. Dave is currently unemployed after a number of years working as an Art Director/Advertiser for Mother Advertising in NYC.

Image credits: Photographs by Stephen “The Photographer” Clarke and used with permission

Good Enough to Succeed in Photography