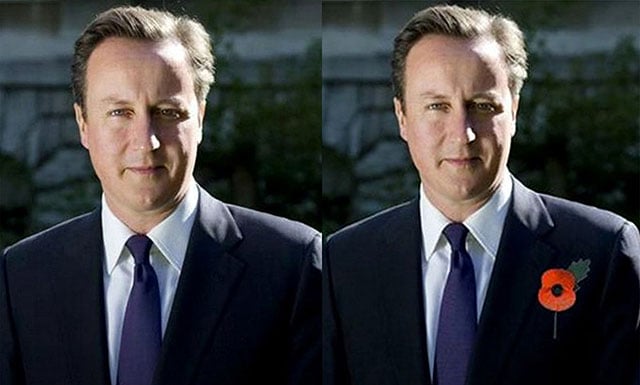 Remembrance Sunday is this week in the UK and the Commonwealth, and public figures are expected to wear remembrance poppies on their clothing to commemorate soldiers who have died in war. Prime Minister David Cameron is finding out the hard way this week that Photoshopping a poppy isn’t viewed in the same way as actually wearing one.

On Monday afternoon, the official Facebook page for Downing Street posted a photo of Cameron with a remembrance poppy on his suit. A sharp-eyed guy named Dylan Morris immediately questioned whether the photo was a bad Photoshop job, and a few minutes later, he answered his own question by finding the original shot:

Has the official 10 Downing Street Facebook page photoshopped a poppy onto David Cameron for their new picture? pic.twitter.com/inLOOVcR5G

They definitely have. Here's the original picture from July. Embarrassing. pic.twitter.com/SX9xOJsjor

I see NO evidence that David Cameron’s poppy pic was Photoshopped. People need to stop jumping to conclusions. pic.twitter.com/xISpGwESD1

@paulwaugh @mrjamesob @dylanhm Thank god they didn't go for the first draft of that photoshop! pic.twitter.com/FexJreOBST

Downing Street has since taken down the Photoshopped photo and replaced it with an actual picture of Cameron wearing a poppy:

A spokesperson for Cameron says the manipulated photo was the result of an “oversight.”

Facebook Working on AI That Can Describe Photos to the Blind