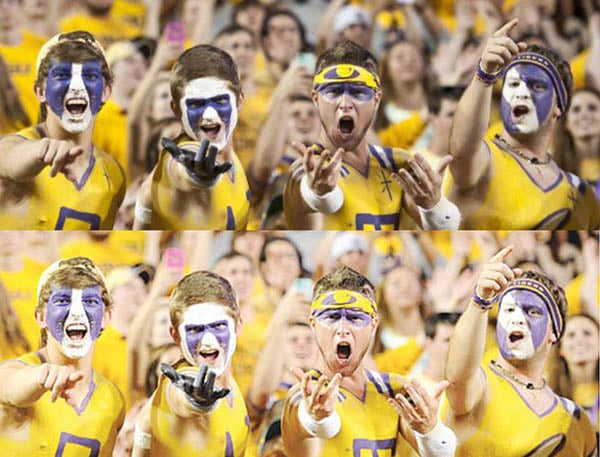 Should Photoshop play a role in political correctness? Louisiana State University is drawing some criticism this week after it came to light that the university had used Photoshop to erase Christian crosses from the chests of body-painted fans.

FoxNews writes that the students in the photo were part of The Painted Posse, a group of Christian football fans that attents LSU football games with tiny crosses painted on their bare chests.

When the photo was sent out as part of a newsletter to students informing them of an upcoming home game, the school decided that it would be best to ‘shop out the religious references.

School spokesman Herb Vincent states that the purpose was to “prevent other students from being offended”:

We don’t want to imply we are making any religious or political statements, so we air-brushed it out. Only one of the students, who didn’t appreciate it, actually contacted us about it. So next time, we’ll just choose a different photo. It was just a straight sports communications message, no politics involved, no religion.

Rick Chandler over at NBCSports writes that the school went “too far”:

Yep, sometimes the effort to be politically correct can go too far — if the university had an issue with the crosses, they should have just skipped the photo. Seems like a pretty easy call to me. Why go to all the trouble of Photoshopping a photo when you could have just used something else[?]

An Eerie Time-Lapse of Seattle Minus All the Humans

The Use of EXIF Data in Digital Photos as Courtroom Evidence