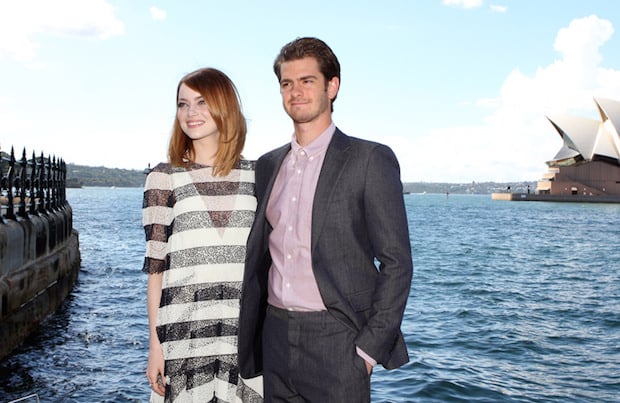 In the photography hierarchy, the paparazzi are considered by many to be the lowest of the low. Even when they get attacked by less-than-loved celebrities, the reaction from many of our readers is rarely sympathetic. But thanks to some creativity and quick thinking, actor couple Emma Stone and Andrew Garfield have managed to turn the pap into a force for charity.

It started in 2012, right after the first Amazing Spider-Man movie had come out. The celebrity duo were eating at a restaurant in New York City when they noticed the gaggle of paparazzi awaiting them outdoors.

But instead of sneaking out a back entrance or muscling their way through the crowd indignantly, they decided to shield their faces using pieces of cardboard with a request to support two of their favorite charities on them:

The stunt got quite a bit of publicity — which was kind of the point, after all — and both Gilda’s Club and Worldwide Orphans Foundation likely received a nice spike in donations in the following days and weeks.

Since then they haven’t been in the spotlight as much, but now that Amazing Spider-Man 2 has come out, Stone and Garfield decided to put the paparazzi to some good use once again. This time they added Youth Mentoring Connection and Autism Speaks to their charity shields:

We’re not sure how many more times this will work, but it’s certainly a creative way to force the paparazzi to do some good without hurting their livelihood in the process.

The images shown in these videos probably sold for as much as any other celebrity photo would, and now four different charities have their name and website plastered all over the Internet as a result.

Classy move Spider-Man… but be honest, it was Gwen’s idea wasn’t it?