If you thought Photoshop 1.0 was primitive, take a look at the video above. What you’re watching is a short section of film shot at the Amiga launch conference that took place in 1985.

Specifically, you’re watching world-renown artist Andy Warhol using his first ever computer to digitally edit a photograph of Debbie Harry by “painting” over it using the Amiga’s graphic program.

As you’re likely aware, around the time many computer companies came around, Andy Warhol was one of the most prolific artists on the face of the Earth. And with each new product release, companies wanted to get Warhol on stage and/or camera to show the world just what one of the most recognizable artists had to say about being able to edit graphics on a “media computer.” 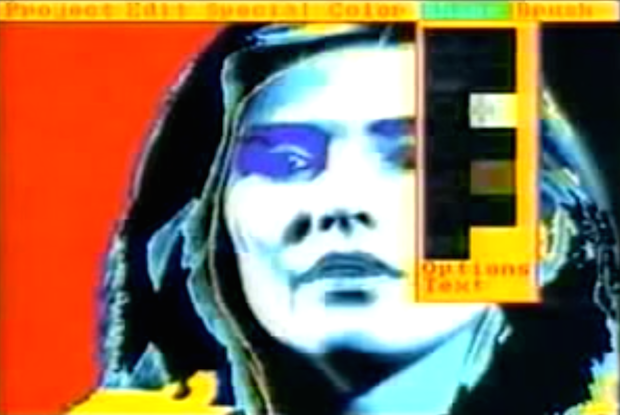 At many of the Amiga conferences (and specifically the release of the Amiga 1000) Warhol spent time playing around with the computers, creating graphics with the then mind-blowing now-laughable hardware and software that was being released. However, with the exception of the image of Debbie Harry he creates in the video above, almost all of his work went unseen, being spread across a collection of 41 floppy disks… remember those?

Recently, however, a team of researchers, artists, archivists, curators and the Computer Club from Carnegie Mellon University teamed up to overcome the challenges that the file types and storage media presented and bring these images back to life. Throughout the revival process, a video team from the Carnegie Museum of Art filmed the teams work, turning it into a documentary titled Trapped: Andy Warhol’s Amiga Experiments.

The film is the second of a five-part series from the Carnegie Museum of Art’s Hillman Photography Initiative, which strives to take a look at the unseen and unknown side of photography and how it came to be.

Trapped: Andy Warhol’s Amiga Experiments premieres May 10th at Pittsburgh’s Carnegie Museum of Art, but for those of us who aren’t going to be able to make it, the film will be available on their website starting on May 12th.

Be sure to check out the links within the article for more information. It’s always interesting to see how the world of digital graphic arts came to life and what better way to bring it to the forefront of recent news than by bringing reviving the work of an artist that forever changed how many approach the arts in general.