If there’s one aspect of technology that seems to ignore Moore’s law at least a little, it’s batteries. Granted, the recent switch to Lithium-Ion improved some aspects, but batteries are still far from where we would like them to be. Hopefully here to help solve that problem is an Israeli start-up called StoreDot.

At Microsoft’s Think Next Conference in Tel Aviv, Israel, Storedot showed off their prototype “Nanodot” battery, which uses bio-nanomaterials to allow rapid charging. How rapid? Under 30 seconds rapid.

It uses nano-crystal technology that was initially created while Tel Aviv University was researching Alzheimer’s, and the tech already looks very promising, even in the prototype stage. 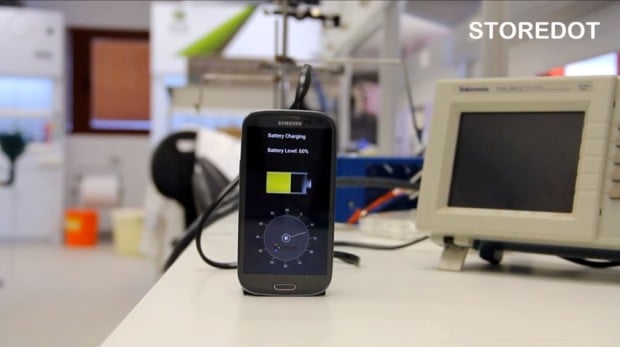 As of now, the battery and accompanying components are a bit rudimentary, consisting of a battery the size of two decks of cards and the external device that it’s connected to. But Storedot is ambitious about shrinking the components down until they’re small enough to fit inside of smartphones — and likely cameras — within a year or so.

The video above shows the battery setup connected to a Samsung Galaxy S4, where in 30 seconds the battery goes from 27% charged to 100% charged. What’s more, that charge then lasts between 2-3 hours, and the tech is only going to improve from here. 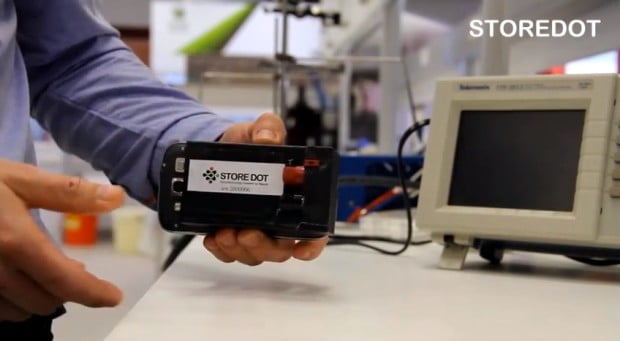 Assuming they can shrink down the technology and start implementing it in a number of devices, we could spend hours imagining the possibilities for photographers. Maybe it’s speedlights with integrated batteries capable of firing off 200 full-power shots before needing a one-minute recharge to do it all over. Or maybe it’s a new type of battery for DSLRs, capable of doing the same.

Regardless of how it gets integrated into the world of photography in the future, it’s exciting to see such tech come to life, and to imagine how it will make the lives of photographers substantially more effective and efficient.

(via BBC via DPReview)