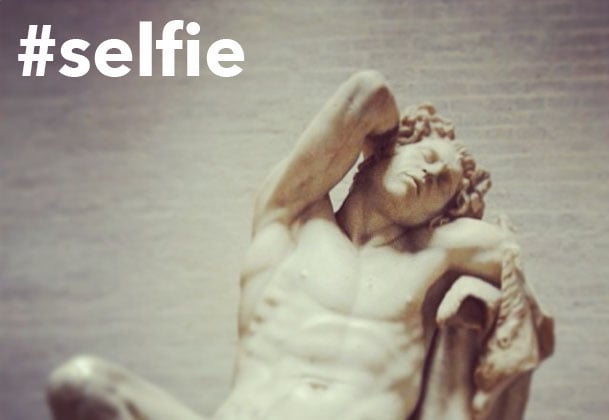 Selfies. We can’t seem to get enough of them. And while they’re somewhat awkward and obnoxious at times, they’re rather harmless, innocent and don’t cause any damage, right? Wrong. Or at least it was in the case of a student who reportedly broke an early 19th century statue in (see update) in Milan, Italy.

According to TIME, he climbed upon the statue of the “Drunken Satyr” in an attempt to capture a selfie with the Hellenistic depiction. During his effort, though, he managed break off the leg of the statue.

For all the art historians who are about to suffer a massive coronary, you can ease up. According to the original report, the broken statue was an early 19th century COPY (no significant value) of the MUCH older original, which is located at the Glyptotek in Munich.

It’s unknown how much trouble the unnamed student is in. It’s also unknown whether he was actually able to capture the selfie before causing the damage. Rest assured though, if it was captured and makes its way online, we’ll be updating this article.

For now, you can content yourself by looking through a gallery of photos of the broken statue over on the Italian website Corriere della Sera, and deciding between the hashtags #smh and #facepalm for when you share this story.

Update: Thanks to one of our Italian-speaking readers, Aezreth, we were able to garner some more information from the original article.

Apparently, this statue is in a school of fine arts, not a museum, and as it has no significant value was located in a hallway instead of one of the more protected rooms. The article also points out that the leg was already starting to come loose, and the statue was scheduled for restoration.

Satellite Time-Lapse Shows the Equinoxes and Solstices from Space